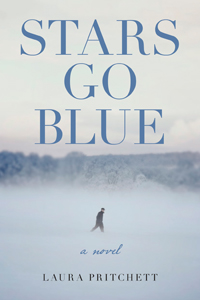 Laura Pritchett is an award–winning author who has quickly become one of the west’s defining literary voices. We first met hardscrabble ranchers Renny and Ben Cross in Laura’s debut collection, and now in Stars Go Blue, they are estranged, elderly spouses living on opposite ends of their sprawling ranch, faced with the particular decline of a fading farm and Ben’s struggle with Alzheimer’s disease. He is just on the cusp of dementia, able to recognize he is sick but unable to do anything about it —the notes he leaves in his pockets and around the house to remind him of himself, his family, and his responsibilities are no longer as helpful as they used to be. Watching his estranged wife forced into care–taking and brought to her breaking point, Ben decides to leave his life with whatever dignity and grace remains.

As Ben makes his decision, a new horrible truth comes to light: Ray, the abusive husband of their late daughter is being released from prison early. This opens old wounds in Ben, his wife, his surviving daughter, and four grandchildren. Branded with a need for justice, Ben must act before his mind leaves him, and sets off during a brutal snowstorm to confront the man who murdered his daughter. Renny, realizing he is missing, sets off to either stop or witness her husband’s act of vengeance.

Stars Go Blue is a triumphant novel of the American family, buffered by the workings of a ranch and the music offered by the landscape and animal life upon it.

LAURA PRITCHETT is the acclaimed author of Stars Go Blue, Red Lightning, Hell's Bottom, Colorado, and Sky Bridge, as well as several books of nonfiction. Her work has garnered several awards, including the PEN USA Award for Fiction, the WILLA, the High Plains Book Award, and others. Her work has appeared in The New York Times, O, The Oprah Magazine, Salon, High Country News, The Sun, Orion, and many others.

Praise
"In this haunting tale. . .the weather plays a supporting character, and its unpredictability, constantly switching from placid to punishing, mirrors the tenderness and the tumult in the couple's marriage. Pritchett's prose is so beautifully crafted that she manages to make sadness beautiful and tragedy compelling."—Real Simple

"There is more than just the bleak and unforgiving setting of the Rocky Mountain foothills to recommend Pritchett to fans of Kent Haruf's similarly placed novels. Strength of character and simplicity of language comparably complement a rich underpinning of savagery and sadness as Pritchett sensitively navigates the end of a life and sublimely realizes its enduring legacy."—Booklist, Starred Review

"Pritchett delivers a brilliant novel, filled with heartache and humor, that will strike a chord with many readers. A heart–wrenching exploration of a family in crisis."—Library Journal, Starred Review

""Pritchett's prose is luminous and sparse, her dialogue revealing and muscular. . . She writes to understand, and, in doing so, invites the reader to explore the boundaries of their own relationships and the decisions they have made, out of fear, out of anger, or out of love. It's an invitation you should accept." —The Coloradoan

"Pritchett has a remarkable talent for laying down the harshness of ranch — and human — life without letting the narrative itself descend into bitterness, and the novel ends not on the kind of saccharine note one might expect, but survival and acceptance. Her clean prose draws the reader into painfully real evocations of all who suffer, even as she lets the beauty of the world blossom."
—Boulder Daily Camera

"This is a short, but excellent, novel about the Cross's, an American ranching family.... The characters in Stars Go Blue are brave despite their flaws, and this book delivers a very powerful message about families." —Alberni Valley Times

"Laura Pritchett's is a fine new voice, fully her own, with wise sensibilities. The deep territory mapped here in the triangular boundary between regret and endurance and hope is well illuminated and finely wrought."
—Rick Bass, author of The Stars, the Sky, the Wilderness

"Stars Go Blue manages to be both warm–hearted and violent at once—
a complex deeply–imagined family tale which finds unexpected gifts at its conclusion. Laura Pritchett is a writer who knows country life on the Rocky Mountain front range thoroughly and she conveys this physical world expertly, beautifully out of her long experience. Within this specific place her clear depiction of character and suspenseful delivery of story compel us to the last exact word." —Kent Haruf, author of Plainsong and Eventide

"In prose as bright as mountain air we meet a retired rancher whose memory is failing and his estranged, hard–bitten wife, as each attempts to prepare for the release from prison of the stranger who murdered their daughter. Their narratives are as gripping as they are intelligent, as wise as they are funny, as unsentimental as they are tender. What results is proof positive that Pritchett is one of Colorado's best–kept literary secrets, a superb writer."
—Laura Hendrie, author of Stygo