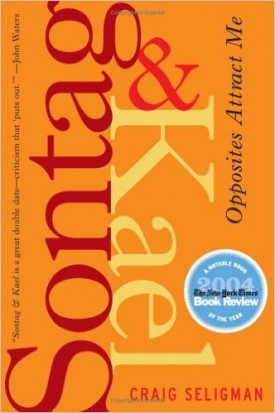 A witty and stylish assessment of the work of two icons of cultural criticism: Susan Sontag and Pauline Kael.

Though outwardly they had some things in common–they were both Westerners who came east, both schooled in philosophy, both secular Jews and both single mothers–they were polar opposites in temperament and approach. Seligman approaches both women through their widely discussed work. Kael practiced a kind of verbal jazz–exuberant, excessive, intimate, emotional and funny. Sontag is formal and rather icy. From the beginning it’s clear where Seligman’s sympathies lie: Sontag is a critic he reveres; but Kael is a critic he loves. But for all his reservations about Sontag, he considers both writers magnificent and his exploration of their differences results in this luminously written landmark of criticism.

Craig Seligman was born in Louisiana and educated at Stanford and Oxford. He has been an editor at The New Yorker, Food & Wine, and Salon. He's written criticism for a wide variety of publications, including the San Francisco Examiner (where he was a staff film and book critic in the 1980s), The New Republic, the Threepenny Review, the Village Voice, Artforum, Bookforum, and The New York Times Book Review (where he remains a frequent contributor). He lives in Brooklyn, New York with his partner, Silvana Nova.

Praise
"Seligman's openness and fluency take us to a place we couldn't have reached without him."