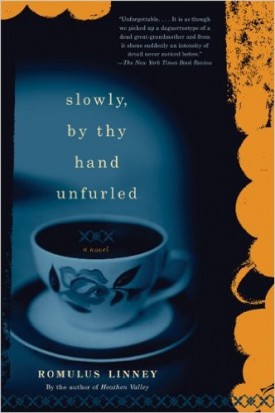 Slowly, By Thy Hand Unfurled

In Slowly, By Thy Hand Unfurled, a nineteenth century nameless and uneducated housewife records a remarkable diary of her dark, disintegrating journey. Trying to make sense of herself and to form a judgment of her life, she struggles in confusion to pierce the narrow limits of her understanding—of her time and place, of the realities of her nature. Romulus Linney has written an exquisite exercise in self–destruction, but it’s final strength rests in its naked yet compassionate treatment of human guilt and suffering. The diarist’s language is blunt and deformed, but it also reaches toward a lyricism as she sees the discrepancies between what she professes and what she practices—as a mother, a wife, and individual.

He won two OBIE awards, one for Sustained Excellence in Playwriting, two National Critics Awards, three DramaLogue Awards, and many fellowships, including grants from the Guggenheim and Rockefeller Foundations. He is the Founding Playwright of Signature Theatre Company. Stories appear in many literary journals and in the Anthologies Pushcart Prize, New Stories from the South, Best of the Year, 2001 and 2002. His 1960s novels, Heathen Valley and Slowly, By Thy Hand Unfurled, were recently republished by Shoemaker & Hoard, Washington, D.C. He is a member of the American Academy of Arts and Letters, which has given him its Award in Literature and The Gold Medal For Drama.
Praise
"An extraordinary tour de force.... The skill with which Linney has maintained the tone of a middle-aged, half-illiterate, self-deceiving woman is remarkable. Even more remarkable is the depth of the revelation he has achieved by this singularly difficult device."