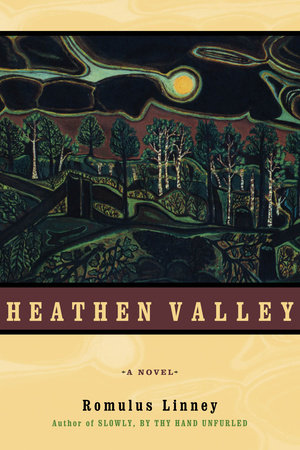 Heathen Valley, Romulus Linney’s haunting and original novel, was born from the church histories of the Valle Crucis mission in western North Carolina. Told in four parts, it is a story set in an almost unknown valley, “Heathen, a valley That Forgot God.” With a quiet, muscular violence and biblical grace that readers of Cormac McCarthy will recognize, Linney takes us into the 1850s, where an idealistic Bishop from New England and a life–whipped, sorrowful transient named Starns, struggle to win souls and transform the valley. Widely reviewed when it was first published in 1962 and selected as an alternate for the Book of the Month Club, Romulus Linney’s first novel Heathen Valley was never reprinted and has never before been in paperback.

“Starns was thirty–two years old that night, but he looked fifty. He was like a much older man who comes late in life to what learning he possesses, and therefore has no fear of what he knows he will never understand.” from Heathen Valley

He won two OBIE awards, one for Sustained Excellence in Playwriting, two National Critics Awards, three DramaLogue Awards, and many fellowships, including grants from the Guggenheim and Rockefeller Foundations. He is the Founding Playwright of Signature Theatre Company. Stories appear in many literary journals and in the Anthologies Pushcart Prize, New Stories from the South, Best of the Year, 2001 and 2002. His 1960s novels, Heathen Valley and Slowly, By Thy Hand Unfurled, were recently republished by Shoemaker & Hoard, Washington, D.C. He is a member of the American Academy of Arts and Letters, which has given him its Award in Literature and The Gold Medal For Drama.

"Linney has filled [Heathen Valley] with historical and botanical lore as well as psychological insight; throughout, the book shows a deep concern with the spiritual natures of men, with the qualities which reveal them at their best and their worst."
Don't miss news & events from Counterpoint Press.
Subscribe to the newsletter today.