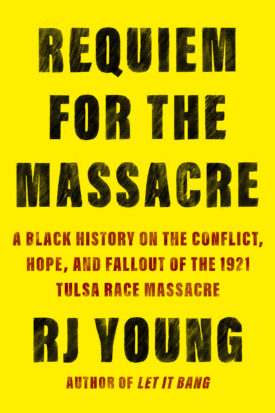 Requiem for the Massacre

A Black History on the Conflict, Hope, and Fallout of the 1921 Tulsa Race Massacre

With journalistic skill, heart, and hope, Requiem for the Massacre reckons with the tension in Tulsa, Oklahoma, one hundred years after the most infamous act of racial violence in American history

More than one hundred years ago, the city of Tulsa, Oklahoma, perpetrated a massacre against its Black residents. For generations, the true story was ignored, covered up, and diminished by those in power and in a position to preserve the status quo. Blending memoir and immersive journalism, RJ Young shows how, today, Tulsa combats its racist past while remaining all too tolerant of racial injustice.

Requiem for the Massacre is a cultural excavation of Tulsa one hundred years after one of the worst acts of domestic terrorism in U.S. history. Young focuses on unearthing the narrative surrounding previously all-Black Greenwood district while challenging an apocryphal narrative that includes so-called Black Wall Street, Booker T. Washington, and Black exceptionalism. Young provides a firsthand account of the centennial events commemorating Tulsa’s darkest day as the city attempts to reckon with its self-image, commercialization of its atrocity, and the aftermath of the massacre that shows how things have changed and how they have stayed woefully the same.

As Tulsa and the United States head into the next one hundred years, Young’s own reflections thread together the stories of a community and a nation trying to heal and trying to hope.

RJ YOUNG is the author of Let It Bang: A Young Black Man's Reluctant Odyssey into Guns and a national college football writer and analyst at FOX Sports.