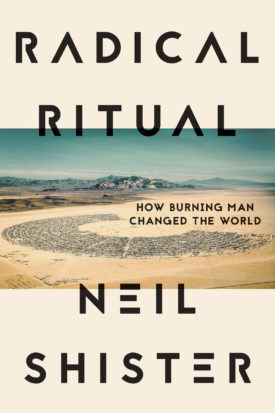 How Burning Man Changed the World

“Neil Shister’s book skillfully traces the evolution of Burning Man and provides rare insights into how this cultural phenomenon is changing the world.” —Michael Mikel, founding board member of the Burning Man Project

Written from Neil Shister’s perspective as a journalist, student of American culture, and six–time participant in Burning Man, Radical Ritual presents the event as vitally, historically important. Shister contends that Burning Man is a significant player in the avant–garde, forging new social paradigms as liberal democracy unravels. Burning Man’s contribution to this new order is postmodern, a fusion of sixties humanism with state–of–the–art Silicon Valley wizardry.

Shister is not alone in his opinion. In 2018, the Smithsonian dedicated its entire Renwick Gallery, located next door to the White House, to an exhibition of Burning Man art and culture. The festival intertwines conservative and progressive ideas. On one hand it is a celebration of self–reliance, personal accountability, and individual freedom; on the other hand it is based on strong values of inclusion, consensual decision making, and centered, collaborative endeavor.

In a wonderful mix of narrative storytelling and reportage, Radical Ritual discusses how Burning Man has impacted the art world, disaster relief, urban renewal, the utilization of renewable energy, and even the corporate governance of Google. The story concludes with the sudden death in April 2018 of Larry Harvey, now renowned as the philosophical epicenter of the movement.

Neil Shister has been a correspondent with Time, television critic for the Miami Herald, and editor of Atlanta magazine. He's taught at Hampshire College, Boston University, and The George Washington University. He was a Peace Corps Volunteer in the Côte d'Ivoire (1968-1970). He lives in Washington, D.C. with wife, Cait, and son, William.

Rolling Stone, One of the Best Books About Burning Man

“Neil Shister writes with great relish about how the annual revel has been irradiating the culture with creativity, self–reliance, collective action and a democratic can–do spirit . . . His enthusiasm for the festival’s super–charged civic atmosphere—what he calls 'a colossal circus of trust–worthiness and compassion, empathy and generosity of spirit'—corrects the common view of Black Rock City as an al fresco Studio 54.” —Chris Jennings, The Wall Street Journal

“Fascinated by the history, culture, and debauchery of Burning Man? Radical Ritual will give you the juice (while explaining how it has evolved). Author Neil Shister is a journalist and historian, but he’s also a Burner. So he treads the line between participant and storyteller as he digs through the forces that have shaped the festival, from self–governance to Google. The book focuses largely on the life of founder Larry Harvey, but it also looks at how the event has changed over time and how it’s gone from an outsider ritual to a heavily used symbol of the technocracy.” —Heather Hansman, Outside, 1 of 5 Absorbing Books to Get You Through Midsummer

“Through interviews with the event’s principals and behind–the–scenes stories of how Burning Man and Black Rock City work, [Shister] offers a glimpse of festival history that not even its dust–covered participants are likely to see.” —John Przybys, Las Vegas Review–Journal

“Shister’s book combines a history of the event’s growth with a look under the hood of Harvey’s theories about positive social engineering.” —James Sullivan, San Francisco Chronicle

“A fascinating, immersive exploration of the annual weeklong bohemian festival . . . Shister does a splendid job of sketching in the features and the future of Burning Man and its residual global influence with a vivid narrative and anecdotal interviews. A focused insider's guide to Burning Man and a posthumous nod to its intrepid creator.” —Kirkus Reviews

“How do you capture magic and serendipity in telling the historic tale of how Burning Man has turned into the world's most storied annual pilgrimage? Neil Shister weaves a compelling narrative—full of fascinating characters and little–known details—that helps us to understand why this event has become such a modern–day phenomenon.” —Chip Conley, hospitality entrepreneur and bestselling author of Wisdom @ Work: The Making of a Modern Elder

“Masterfully organized and written with a clarity and liveliness that pulls us along, Neil Shister’s Radical Ritual meshes two different approaches to its elusive subject. It combines the intellectual insights of a seasoned objective reporter and analyst who has studied Burning Man’s history and creators in depth with the deeply personal responses of an active (though hardly unquestioning) participant who conveys the experiential feel of being there. The result is a brilliantly successful synthesis and wonderful read from start to finish.” —Carl Smith, author of The Plan of Chicago and professor of American studies and history at Northwestern University

“An all–in history of, and love letter to, this one–of–a–kind event. If you’ve been there, or want to go, you couldn’t possibly find better companions than Neil Shister and his engaging book.” —Daniel Okrent, author of Last Call and The Guarded Gate

“Radical Ritual reads like a zany, hip, futuristic novel. The values of Burning Man might just help us figure out what is real and human in an age of artifice.” —Anne–Marie Slaughter, author of Unfinished Business

“Reading Radical Ritual is like a joyful meander through Black Rock City—you can be sure it will be engaging, enlightening, and exactly what you need at the moment.” —Jennifer Raiser, author of Burning Man: Art on Fire

“Neil Shister’s book skillfully traces the evolution of Burning Man and provides rare insights into how this cultural phenomenon is changing the world.” —Michael Mikel, founding board member of the Burning Man Project

“Virgins—those who have never been to Burning Man—should read this book. Veteran Burners will want to read it twice. Read this book, or I will leave MOOP everywhere.” —Grover Norquist, Burning Man attendee and American political activist and strategist