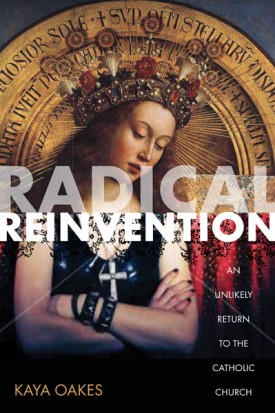 An Unlikely Return to the Catholic Church

As someone who clocked more time in mosh pits and at pro–choice rallies than kneeling in a pew, Kaya Oakes was not necessarily the kind of Catholic girl the Vatican was after. But even while she immersed herself in the punk rock scene and proudly called herself an atheist, something kept pulling her back to the religion of her Irish roots.

After running away from the Church for thirty years, Kaya decides to return. Her marriage is under stress, her job is no longer satisfying, and with multiple deaths in her family, a darkness looms large. In spite of her frustration with Catholic conservatism, nothing brings her peace like Mass. After years of searching to no avail for a better religious fit, she realizes that the only way to find harmony—in her faith and her personal life—is to confront the Church she’d left behind.

Rebellious and hypercritical, Kaya relearns the catechisms and achieves the sacraments, all while trying to reconcile her liberal beliefs with contemporary Church philosophy. Along the way she meets a group of feisty feminist nuns, a “pray–and–bitch” circle, an all–too handsome Italian priest, and a motley crew of misfits doing their best to find their voices in an outdated institution.

This is a story of transformation, not only of Kaya’s from ex–Catholic to amateur theologian, but ultimately of the cultural and ethical pushes for change that are rocking the world’s largest religion to its core.

Kaya Oakes is the author of Slanted and Enchanted: The Evolution of Indie Culture, the poetry collection Telegraph, and cofounder of Kitchen Sink, winner of the Utne Independent Press Award for Best New Magazine. She teaches at the University of California, Berkeley, and lives in Oakland.

"Oakes not only treats readers to gorgeous prose, but manages to provide an overview and history of the best of the Catholic faith, without losing momentum." —Publishers Weekly (starred review)

"[An] uneasy entry back into the Catholic church, with plenty of F–bombs thrown in for good effect." —Kirkus

Praise for Slanted and Enchanted

"An impassioned, optimistic case for indie's vitality that doesn't assume readers are coming to [the] book already well versed in the subject . . . Fresh and perceptive." —San Francisco Chronicle

"Oakes is no dry outsider. She believes in what she describes, she contributes to it and she speaks its language." —The Plain Dealer (Cleveland)

"As an explanation and excavation of the already fading recent past, it is essential reading." —Publishers Weekly