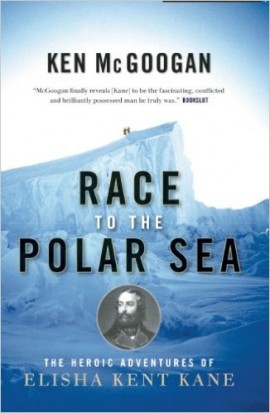 Race to the Polar Sea

In the mid–1800s, geographers revived the ancient idea that at the top of the world, encircling the North Pole, lay a temperate “Open Polar Sea.” Without doubt, the voyager who discovered this balmy basin would etch his name forever in the annals of exploration. Among those drawn to the challenge was Dr. Elisha Kent Kane, a handsome, charismatic figure from a leading Philadelphia family who was already a well–known adventurer and explorer. In 1853, Kane sailed to the Arctic to seek both the Open Polar Sea and the lost British explorer John Franklin. After sailing farther north than anyone yet, Kane and his men became trapped in the ice. Besides treacherous icebergs and violent currents, Kane battled starvation, disease, and a near mutiny before abandoning ship to lead a desperate escape in sleds and small boats. Race to the Polar Sea tells this story in heart–pounding detail. Drawing on documents never before seen, author Ken McGoogan brings to life a heroic figure famous in his day as America’s greatest explorer and celebrates a shining example of American courage and survival.

Ken McGoogan is a globe-trotting Canadian writer who survived shipwreck off Dar es Salaam, chased the ghost of Lady Franklin from Russell Square to Van Diemen's Land, and placed a John Rae memorial plaque in the High Arctic. Ken has published fifteen books--six histories, five biographies, three novels, and one ghosted work. His bestselling titles include Dead Reckoning, Celtic Lightning, Fatal Passage, 50 Canadians Who Changed the World, How the Scots Invented Canada, Lady Franklin's Revenge, and Flight of the Highlanders.

"McGoogan's fascinating biography focuses on a neglected figure from the early era of polar exploration . . . With his access to previously unknown Kane logbooks, McGoogan makes an impressive case for the bravery and importance of the explorer who first identified the Greenland ice sheet." —Publishers Weekly

"An incredible and frightening journey." —Booklist

"McGoogan frames this exciting biography in terms of the mythological concepts of the hero and the transformative quest. Highly recommended." —Library Journal