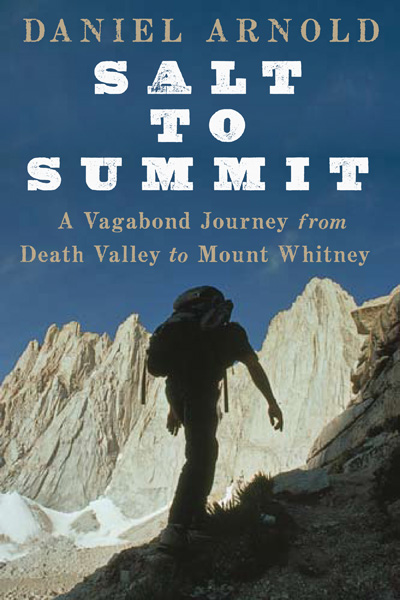 A Vagabond Journey from Death Valley to Mount Whitney

From the depths of Death Valley, Daniel Arnold set out to reach Mount Whitney in a way no road or trail could take him. Anything manmade or designed to make travel easy was out. With a backpack full of empty two–liter bottles, and the remotest corners of desert before him, he began his toughest test yet of physical and mental endurance.

Badwater Basin sits 282 feet below sea level in Death Valley, the lowest and hottest place in the Western Hemisphere. Mount Whitney rises 14,505 feet above sea level, the highest point in the contiguous United States. Arnold spent seventeen days traveling a roundabout route from one to the other, traversing salt flats, scaling dunes, and sinking into slot canyons. Aside from bighorn sheep and a phantom mountain lion, his only companions were ghosts of the dreamers and misfits who first dared into this unknown territory. He walked in the footsteps of William Manly, who rescued the last of the forty–niners from the bottom of Death Valley; tracked John LeMoigne, a prospector who died in the sand with his burros; and relived the tales of Mary Austin, who learned the secret trails of the Shoshone Indians. This is their story too, as much as it is a history of salt and water and of the places they collide and disappear.

Guiding the reader up treacherous climbs and through burning sands, Arnold captures the dramatic landscapes as only he can with photographs to bring it all to life. From the salt to the summit, this is an epic journey across America’s most legendary desert.

At fifteen, Daniel Arnold began climbing the Pacific Rim volcanoes and local basalt crags of his native Portland and went on to climb throughout North and South America. He lives in southern California, and Early Days in the Range of Light is his first book.

Praise for Early Days in the Range of Light

"With great originality and insight . . . This is a splendid chronicle of early climbing in the Sierra Nevada." —Royal Robbins
Don't miss news & events from Counterpoint Press.
Subscribe to the newsletter today.