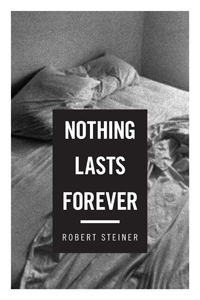 Into the Green Ocean Deep sees a man’s last days with a dying lover as they engage in a final burst of transgressive eroticism. Negative Space recites the anguished thoughts of a man whose wife of twenty years has confessed her love for someone else as she packs to leave. In Inviolate, a wife suffers the imminent death of her husband from a fall that has left him comatose. “Once coma defined the limit of her husband’s existence for the rest of it he was as well as he would ever be and so his wife at the foot of the bed observed that this was as good as he was going to look.”

Robert Steiner is a master. His work ranks alongside J G Ballard, Vladimir Nabokov, and James Salter. One cannot overstate his importance as an American stylist in the 21st century. He is the author of several books including Matinee, Quill, The Catastrophe, and Bathers. He now lives in Florida.

Praise
Praise for Nothing Lasts Forever:

"Steiner knows what he's doing, and he's in firm command of his style."—Kirkus

"Through its articulate and painfully nuanced first–person narration, Steiner's examination of jealousy and betrayal at its simplest becomes something sublime." —Publishers Weekly, starred review

"Out of personal bravery, Steiner manages to deal directly long and hard with darkness. Sometimes reading him, one shakes oneself." —Grace Paley

"There is no writer of his generation of whom I think more greatly." —John Hawkes

"Robert Steiner . . . has written astonishing work . . . in a style dark and gorgeous. (He) is a master of the sensual." —Los Angeles Times