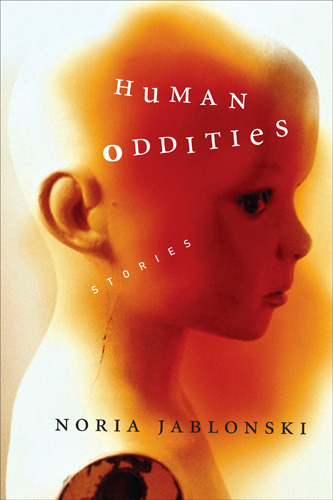 In Human Oddities, we meet Siamese twins, newly separated, drag queens, and seedy hospital orderlies. A corpse washed up on the beach, cancer diagnoses, and tummy tuck operations all intrude abruptly into characters’ lives; sadness is interrupted by hilarity. Jablonski’s characters cope with the drama of the body and what it means, what it feels like, to be marked as different.

If Ludwig Wittgenstein’s belief that “the human body is the best picture of the human soul” is right, what does that say about the diseased body, the less–than–perfect body? Without flinching, Noria Jablonski shows us the passions and longings of her characters, made more vivid by their bodies in doubt, on hold, in transit. Her earthy, pungent characters and deadpan narrative style leave their mark on a reader.

With the blunt, gritty impact of a Diane Arbus photograph, these are stories of lives not commonly recorded, and the characters—often physically unique, some might say monstrous—are delivered with compassion, dignity, and a hopeful, therapeutic humor. Brought to light, they deepen our understanding of the human condition, revealing us to ourselves.

Noria Jablonski is the author of Human Oddities: Stories. She lives in California.