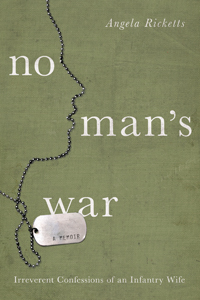 Irreverent Confessions of an Infantry Wife

Raised as an army brat, Angie Ricketts though she knew what she was in for when she eloped with Darrin – then an Infantry Lieutenant – on the eve of his deployment to Somalia. Since then, Darrin, now a Colonel, has been deployed eight times, serving four of those tours in Iraq and Afghanistan. And Ricketts has lived every one of those deployments intimately – distant enough to survive the years apart from her husband, but close enough to share a common purpose and a lifestyle they both love.

With humor, candor, and a brazen attitude, Ricketts pulls back the curtain on a subculture many readers know, but few ill ever experience Counter to the dramatized snapshot seen on Lifetime’s Army Wives, Ricketts digs into the personalities and posturing that officers’ wives must survive daily – whether navigating a social event at the base, suffering through a husband’s prolonged deployment, or reacting to a close friend’s death in combat.

At its core, No Man’s War is a story of sisterhood and survival. As Ricketts states: “We tread those treacherous waters together. Do we sometimes shove each other’s heads underwater for a few seconds? Maybe even on purpose? Of course. Are we sometimes dragged underwater ourselves by the undertow created by all of us struggling together too closely? Without a doubt. But we never let each other drown. Our buoyancy is our survival.”

Angie Ricketts holds a master's degree in Social Psychology/Human Relations and an undergraduate degree in Sociology. She worked part-time for the American Red Cross in Germany in the 1990's but since then her formal education has been used to navigate the politics and personalities that come with being an officer's wife. Her husband remains on active duty but transitioned to Homeland Defense in 2012. She lives in Colorado Springs, CO.

Praise
"Outspoken in her critique of the "Army machine," Ricketts celebrates the "secret sisterhood" of soldiers' wives, defiantly and desperately battling for survival. A blunt, bold debut memoir." ––Kirkus

"If you've ever wanted to know what life on an army base is like, you have to read this amazingly honest memoir. Though Ricketts is a self–described military "Real Housewife," her experience is nothing like the clichéd stuff you see on TV. We were completely immersed in her world." —PureWow