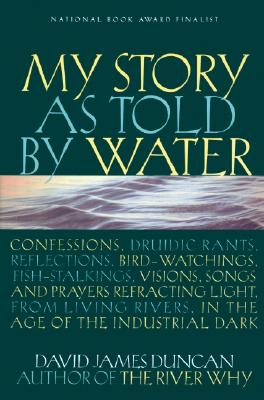 My Story as Told by Water

In this remarkable collection of essays, acclaimed author David James Duncan braids his contemplative, rhapsodic, and activist voices together into a potently distinctive whole, speaking with power and urgency about the vital connections between our water–filled bodies and this water–covered planet. All twenty–two pieces in this collection swirl and eddy around his early–forged bond with the rivers of the Pacific Northwest and their endangered native salmon. With a bracing blend of story, science, and comedy, Duncan relates mystical, life–changing adventures; draws incisive portraits of the humans and wild creatures who shaped his destiny; rips the corporate greed and political folly that have brought whole ecosystems to ruin; and meditates on the spiritual and practical necessity of acknowledging our dependence on water in its primal state.

David James Duncan is the recipient of a Lannan Literary Fellowship and is a National Book Award finalist for My Story as Told by Water. Best known for his two best-selling novels, The River Why and The Brothers K--both received the Pacific Northwest Booksellers award. The Brothers K was a New York Times Notable Book in 1992 and won a Best Books Award from the American Library Association.

Praise
"Refreshing as a glass of cold water on a scorching day. . . . Duncan invites, includes, intrigues, and inculcates his readers so that they will never think of the Pacific Northwest, salmon, Montana, or Nevada gold mines as they did before."--"Library Journal"