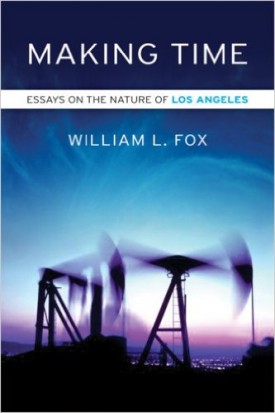 Essays on the Nature of Los Angeles

A master of combining science, history, and his own experiences into a riveting read, William L. Fox will make you look at L.A.–and any urban landscape –in an entirely new way.

William L. Fox is a longtime explorer of cognition and landscape–the notion of what makes a space into a place. In this book he turns his gaze on Los Angeles, a city dominated by the movie industry, which specializes in bringing places from far away in time into what we experience as here and now–making time, in essence. Time, Fox tells us, is the most invisible nature of all, “its effects are always and everywhere around us.”

The five essays of this collection take us to the Le Brea Tar Pits and local oilfields, the telescopes and telecommunication towers of Mt. Wilson, massive landfills, the Forest Lawn Memorial and Griffith parks, a Hollywood special effects firm, and the Jet Propulsion Laboratory. All of these facilities are devoted to manipulating time on our behalf, be it how we represent prehistory, attempt to maintain an identity after death, or make movies on Mars.

William L. Fox, Director of the Center for Art + Environment at the Nevada Museum of Art in Reno, Nevada, has variously been called an art critic, science writer, and cultural geographer. He has published sixteen books on cognition, art, and landscape, more than a hundred essays in art monographs, magazines, and journals, and fifteen collections of poetry.

Fox has researched and written books set in the Antarctic, the Arctic, the Himalaya, and the deserts of Chile, Australia, and the United States. He is a fellow of both the Royal Geographical Society and Explorers Club, and recipient of fellowships from the Guggenheim Foundation, National Endowment for the Humanities, and National Science Foundation. He has been a visiting scholar at the Getty Research Institute, the Clark Art Institute, the Australian National University, the National Museum of Australia, and the Oslo School of Architecture and Design.