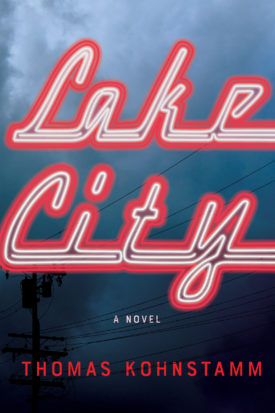 “Lake City is a darkly funny and extremely relevant debut novel about American inequality and moral authority, featuring a sad–sack antihero who takes way too long to grow up. When he finally does, the results are beautiful, and the book ultimately becomes an elegy for a now–gone Seattle, and a lesson in how the place we’re from never fully lets us go.” —Anthony Doerr, author of All the Light We Cannot See

Hunkered down in his childhood bedroom in Seattle’s worn–out Lake City neighborhood, idealistic but self–serving striver Lane Bueche licks his wounds and hatches a plot to win back his estranged Manhattanite wife.

He discovers a precarious path forward when he is contracted by a wealthy adoptive couple to seduce and sabotage a troubled birth mother from his neighborhood. Lane soon finds himself in a zero–sum game between the families as he straddles two cultures, classes, and worlds. Until finally, with the well–being of the toddler at stake, Lane must choose between wanting to do the right thing (if he could only figure out what that is) and reclaiming his idea of privilege.

THOMAS KOHNSTAMM was an experienced travel writer when Broadway Books released his travel memoir Do Travel Writers Go to Hell? Kohnstamm was a 2017 fellow at the Sundance New Voices Lab and currently maintains a studio where he writes feature articles and produces video for clients like Xbox and Minecraft. Lake City is his first novel. He lives in Seattle with his wife and two children.

“A caustic satire on class privilege and deprivation . . . Along with steeping you in the sodden, bone–chilling back streets of Lake City, Kohnstamm serves up historical background on the neighborhood and even tosses in a capsule corporate history of Fred Meyer for good measure . . . The portrait Kohnstamm offers of a Seattle backwater trailing in the wake of the Emerald City’s rising glamour is indelible.” —Michael Upchurch, The Seattle Times

“I love Thomas Kohnstamm for writing a whole book set in Lake City. Someone had to. Someone had to make something of the in–between area known for its car dealerships, its strip club, its sub sandwich shop, and its couple of bars. A place that doesn't even know if it's a lake or a city or a city of lakes. In Kohnstamm's debut novel, a semi–shitty guy named Lane Beuche has fallen on hard times. He's lost his wife, he's living in his mom's house, and he thinks he deserves the life of privilege from which he's been unceremoniously banished. Watch him climb out of the hole he dug for himself, and enjoy the elegy for old Seattle along the way.” —Rich Smith, The Stranger

“An intelligent, darkly comic page turner . . . Parts of it read like outtakes from Jonathan Franzen’s The Corrections or Jess Walter’s The Financial Lives of Poets . . . Kohnstamm has a zippy sense of plot and a fine eye for detail.” —Stefan Milne, Seattle Met

“Kohnstamm’s book takes you into the heart of this usually ignored corner of Northeast Seattle and lucidly portrays the grit of Lake City Way, its trailer parks, its dive bars, and, most vividly, its Fred Meyer.” —Lester Black, The Stranger“This is a book that embraces Gary Snyder’s unofficial title as 'The Poet of Lake City.' Hell, the very first page of the story reads like a poem praising the strip malls and run–down garages of Lake City Way . . . Lake City is a story as pugnacious and as charming as its protagonist . . . Kohnstamm may be concerned with recreating a Seattle of a different time, but he insists on engaging modern Seattle in a deep conversation.” —Paul Constant, The Seattle Review of Books

“The Fred Meyer scenes are glorious . . . Kohnstamm is at his best when he's sending up a special kind of virtue–signaling liberal who claims to live their life in constant service to the oppressed, but who doesn't actually do anything for them . . . Local readers will likely enjoy the familiar locations and scraps of lore.” —Rich Smith, The Stranger

“All at once hip, intrepid, and philosophical . . . Kohnstamm’s fresh voice has a millennial groove, the story is engaging and gritty, and there’s an impressive scrutiny of personal and societal ethics.” —Publishers Weekly

“Executed with the snap of Thomas Kohnstamm's wit, Lake City is one of 2019's unsung treasures, but one you have to be okay dumpster–diving for. And I write that not just because it's set in my hometown, though that undoubtedly plays a factor. There are many phrases in Lake City that only a native Seattleite could have written, as the characters do things that I have done countless times.” —i>PopMatters

“Lake City is a darkly funny and extremely relevant debut novel about American inequality and moral authority, featuring a sad–sack antihero who takes way too long to grow up. When he finally does, the results are beautiful, and the book ultimately becomes an elegy for a now–gone Seattle, and a lesson in how the place we’re from never fully lets us go.” —Anthony Doerr, author of All the Light We Cannot See

“Kohnstamm delivers a blistering, clear–eyed, and surefooted debut novel about the perils and pitfalls of misdirected ambition. More than that, Lake City is a hilarious and sneakily incisive examination of the cultural tensions, and widening class divides that simmer on the fringes of an increasingly homogenized Seattle—or San Francisco, or Brooklyn, or Los Angeles, or any other American city in the throes of affluenza and gentrification.” —Jonathan Evison, author of Lawn Boy

“Kohnstamm has written a novel of Pale Male Fail above and below the poverty line, a Dickensian tale of a fledgling philosopher who’s taken flight from trailer parks to Gramercy Park and then . . . had his wings clipped. This is the American Dream cut thin on a grocery store meat slicer, laced with oxy, stolen booze, and an unfinished dissertation. It’s a rotgut to Dom Pérignon rainbow, which is to say: Lake City is a crucial black comedy about the myths of money and happiness, and whether nature, nurture, or AmEx rears a better man.” —Maria Dahvana Headley, New York Times–bestselling author of The Mere Wife

“There are so many reasons to admire Thomas Kohnstamm’s astonishing debut novel: his astute and cutting depiction of urban gentrification, his pitch–perfect evocation of a young man’s endless ricochet between self–aggrandizement and self–hatred, his vision of Seattle’s grungy underside that is so richly related one can almost smell the cedar and cannabis wafting off the pages. And yet, it is Kohnstamm’s innate storytelling verve—his taut, noirish knack for plotting and his ability to make the reader laugh, cringe, worry, and feel for his characters all at once— that makes Lake City truly unputdownable.” —Stefan Merrill Block, author of Oliver Loving: A Novel

“Kohnstamm knowingly illuminates the underbelly of Seattle—a place of beater cars, strip clubs, and a subpar hypermarket—far from the hipsters and gentrifiers. Hilarious as it is cutting, Lake City offers an all–too–insightful critique of clashing classes and misguided ideas of success.” —Shari Goldhagen, author of In Some Other World, Maybe

“How many things can go wrong when you try to straddle the line between two economically defined classes in the lovely city of Seattle, Washington, just after the tragic events of 9/11? Lane just wants his wife back (along with her money, of course) but getting into her good graces won’t be easy. When he’s drawn into a scheme to trick a young birth mother in his neighborhood, he thinks it will be a quick step back to the life he’s after. But things often don’t go the way we expect. Eventually, he’s forced to admit that something has to give, and he can’t ignore the needs of the small child that has been caught in this web of intrigue. This is a beautifully crafted debut novel from a man whose writing Jonathan Evison calls 'clear–eyed' and 'blistering.' I couldn’t agree more.” —Linda Bond, Auntie's Bookstore (Spokane, WA)