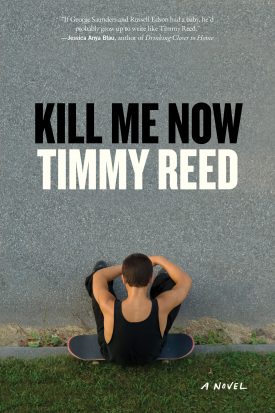 “Timmy Reed writes like a whacked–out angel.” —Amber Sparks, author of The Unfinished World and May We Shed These Human Bodies

Miles Lover is an imaginative but insecure adolescent skateboarder with an unfortunate nickname, about to face his first semester of high school in the fall. In Kill Me Now, Miles exists in a liminal space—between junior high and high school, and between three houses: his mother’s, his father’s, and the now vacant house his family used to call home in a leafy, green neighborhood of north Baltimore. Miles struggles against his parents, his younger identical twin sisters, his probation officer, his old friends, his summer reading list, and his personal essay assignment (having to keep a journal). More than anything, though, he wrestles with himself and the fears that come with growing up.

It’s not until Miles begins a mutually beneficial friendship with a new elderly neighbor—whom his sisters spy on and suspect of murder—that he begins to find some understanding of lives different than his own, of the plain acceptance of true friends, and, maybe, just a little of himself in time to start a whole new year. When you’re green, you grow, he learns. But when you’re ripe, you rot.

With tenderness and tenacity, Timmy Reed’s prose—written in a confessional tone via Miles’s journal—captures the anguish and grit of adolescence, and the potential of growing up.

TIMMY REED is a writer, teacher, and native of Baltimore, Maryland. He received his MFA from University of Baltimore. Timmy is the author of the books Tell God I Don't Exist, The Ghosts That Surrounded Them, Miraculous Fauna, Star Backwards, and IRL. His short fiction has appeared in many places including Necessary Fiction, Atticus Review, Curbside Splendor, and Volume 1 Brooklyn, as well as featured in the Wigleaf Top 50 on multiple occasions. In 2015, he won the Baker Artist Awards Semmes G. Walsh Award. He teaches English at Stevenson University and Community College of Baltimore County and English as a Second Language at Morgan State University.

Praise
Praise for Kill Me Now

“Reed convincingly writes a three–dimensional teenager whose self–consciousness, emotions, and hormones threaten to crush him. . . . A coming–of–age story capturing male adolescence in all its disgusting, irrational, and messy glory.” —Kirkus Reviews

“What distinguishes the book is Miles’ voice: introspective, self–aware, wry, and honest . . . The result is a delightful coming–of–age story.” —Booklist

“Reed captures all the hilarious grossness of being a teenage boy in this solid coming–of–age story.” —Publishers Weekly

“What's most impressive about Reed's work is his attention to detail. From his elaborate descriptions of Baltimore neighborhoods to evocative scenes of Miles smoking weed with his eccentric old neighbor (whom his sisters suspect is a serial killer), Reed meticulously takes readers on a summer–long journey that is as viscerally awkward as our own teenage years.” —Baltimore Magazine

“Timmy Reed’s Kill Me Now captures the feeling of a teenage summer more thoroughly and successfully than many other novels in its genre . . . Reed’s crowning achievement in Kill Me Now may be his ability to offer a three–dimensional picture of Miles’s world. . . even though Miles isn’t real and the journal is a novel, it still feels like you’ve come to know somebody a little better by the time you finish reading it.” —The Michigan Daily

“Through evocative imagery, strong characterizations, and moments of true tenderness, Reed pieces together a portrait of Miles that resonates with the experience of adolescence.” —Atticus Review

“Kill Me Now could be the story of Huckleberry Finn's trip to Hell...or no, just the seamier sides of Baltimore—not so much the mean streets of The Wire as the post–apocalyptic working class neighborhoods of Matt Porterfield's Putty Hill. Miles Lover, a.k.a. Retard, is as crusty a kid as they come, with a taste for strains of trouble that would stagger an adult. But as much as he thinks of himself as a moron, his perceptions of the weird world he lives in are subtly and precisely nuanced, and his story, inside its scaly carapace, has a surprisingly tender heart.”—Madison Smartt Bell, author of Behind the Moon

“Timmy Reed is one of the best. In Kill Me Now, he has created one of the great teenage narrators of our time. Like a modern version of Updike’s Sammy, Miles Lover is part philosopher, part screw up, and part skateboarding prince of Baltimore. He’s wild and buzzing and will say almost anything. Including the truth.” —Scott McClanahan, author of The Sarah Book, Hill William, and Crapalachia

“There was Mark Twain’s Huckleberry Finn, then J. D. Salinger’s Holden Caulfield, and now there is Timmy Reed’s Miles Lover, the irrepressible narrator of Kill Me Now, which is itself a funny, compassionate, and twisted take on the coming–of–age novel.”—Michael Kimball, author of Us, Big Ray, and Dear Everybody

“Kill Me Now is the answer to all the literary fiction that ever bored you . . . a guide book on how to cheat death, smoke bowls, tre flip in the pouring rain. Tough, honest, beautiful in only the way the unashamed ever are. Kill Me Now is an M–80 in an open palm, fuse lit, world holding its breath.” —Bud Smith, author of Work and F 250

“Timmy Reed writes like a whacked–out angel. Miles Lover is the perfect everykid, overlooked and underestimated and so sharply observant it makes you wince a little. I loved this book.” —Amber Sparks, Author of The Unfinished World and May We Shed These Human Bodies

“If George Saunders and Russell Edson had a baby, he'd probably grow up to write like Timmy Reed.” —Jessica Anya Blau, author of Drinking Closer to Home