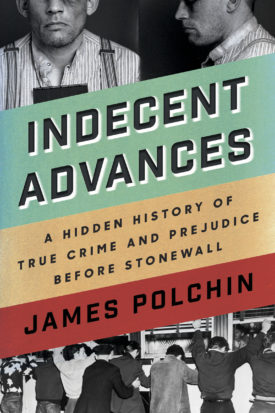 A Hidden History of True Crime and Prejudice Before Stonewall

Stories of murder have never been just about killers and victims. Instead, crime stories take the shape of their times and reflect cultural notions and prejudices. In this Edgar Award–finalist for Best Fact Crime, James Polchin recovers and recounts queer stories from the crime pages―often lurid and euphemistic―that reveal the hidden history of violence against gay men. But what was left unsaid in these crime pages provides insight into the figure of the queer man as both criminal and victim, offering readers tales of vice and violence that aligned gender and sexual deviance with tragic, gruesome endings. Victims were often reported as having made “indecent advances,” forcing the accused’s hands in self–defense and reducing murder charges to manslaughter.

As noted by Caleb Cain in The New Yorker review of Indecent Advances, “it’s impossible to understand gay life in twentieth–century America without reckoning with the dark stories. Gay men were unable to shake free of them until they figured out how to tell the stories themselves, in a new way.” Indecent Advances is the first book to fully investigate these stories of how queer men navigated a society that criminalized them and displayed little compassion for the violence they endured. Polchin shows, with masterful insight, how this discrimination was ultimately transformed by activists to help shape the burgeoning gay rights movement in the years leading up to Stonewall.

JAMES POLCHIN, Ph.D., has taught at the Princeton Writing Program, the Parsons School of Design, the New School for Public Engagement, and the Creative Nonfiction foundation. His writing has appeared in several places, including The New Inquiry, Lambda Literary, Brevity, and the Gay and Lesbian Review Worldwide, where he is a contributing writer. A Clinical Professor at New York University, he lives in New York City with his husband, the photographer Greg Salvatori, and a Labrador named Albert.


“To shed light on these killings, the social conditions and psychological conflicts that gave rise to them, and the manipulative and sensationalist coverage that they often received in the press, the cultural historian James Polchin has written Indecent Advances, a grisly, sobering, comprehensively researched new history. The subject matter doesn’t make for light reading; Polchin admits to feeling 'haunted' by what he discovered in archives. But it’s impossible to understand gay life in twentieth–century America without reckoning with the dark stories. Gay men were unable to shake free of them until they figured out how to tell the stories themselves, in a new way.” —Caleb Cain, The New Yorker

“[A] fascinating new book on the treatment of gay men in true crime and crime fiction [that] reexamines the violence that people at the Stonewall Inn had faced every day, and the rage crackling up underneath . . . What makes Polchin's readings stand out is the way he pursues an underlying story across several seemingly separate crimes.” —Alexander Chee, The New Republic

“Indecent Advances collects and rescues significant gay history and goes a long way toward clarifying why we fight, what we fight for and how prejudice is an historically institutional force.” —Tom Cardamone, Lambda Literary

“Formidably researched . . . A significant contribution to queer history and to understanding the forces that shape contemporary queer identity . . . Indecent Advances is an important book not least of all because, as the Stonewall celebrations begin, it reminds us that queer identity has been shaped as much by trauma as by courage.” —Michael Nava, Los Angeles Review of Books

“Beginning in the years before the Stonewall Riots, Indecent Advances: A Hidden History of True Crime and Prejudice Before Stonewall by James Polchin takes a look at the crimes committed against gay men, long before equality and rights were a notion, let alone even being on the table. Murder, of course, lines the pages of this book but you’ll also read stories of harassment, assault and minor crimes that were embellished so that they could be charged as more serious. Polchin also looks at how criminal acts committed by and aimed at LGBT people came under controversy when attention was paid to one minority group’s safety and not to that of another group. This, the embedded presence of many (in)famous criminals, and other stories lightly linked to Stonewall make it an interesting book.” —Washington Blade

“James Polchin has written an important book about a critical chapter of LGBT history, carefully documenting the victimization and discrimination that gay men suffered before Stonewall. Much has changed, but discrimination and hate crimes still go on, and there are still many battles left to fight and win. The stories in this book are often heartbreaking and brutal, but the larger story of oppression needed to be told.” —Bill Burton, The Gay & Lesbian Review/Worldwide

“Polchin recounts the cases as a series of short thrillers organized by decade through the 20th century. These true stories remain suspenseful episodes of surprising brutality and sensationalized press. Polchin pays scholarly attention to the politics of each era, and tales that were once grisly exploitation of murder victims become tense examinations of journalism and detective work.” —Devlyn Camp, Chicago Reader

“Polchin’s book illuminates the dark side of true crime reporting . . . Full of specific, brutal tales, this is a captivating and troubling read.” —Nick Yeager, The Austin Chronicle

“An eye–opening look at how far we've come and, in its stories' similarity to contemporary accounts of anti–gay violence, a portrait of how far we have left to go.” —K.W. Colyard, Bustle

“Polchin’s harrowing account of the history of violence against queer men hits shelves on the eve of the 50th anniversary of the Stonewall riots. It’s perfect timing for a book that dives deep into these never–before–told true crimes, and looks at the power mainstream messaging had on both the violence and the mounting resistance. Resurrecting a forgotten era of queer history, Polchin masterfully weaves brutal true crime research with critical analysis of the social history, exploring the way the media and nascent psychological theories were weaponizing prejudice and perpetuating a deviant stereotype of gay men.” —Camille LeBlanc, Literary Hub, One of the Most Anticipated Books of the Summer

“[A] harrowing account of the history of violence against queer men . . . It’s perfect timing for a book that dives deep into these never–before–told true crimes, and looks at the power mainstream messaging had on both the violence and the mounting resistance. Resurrecting a forgotten era of queer history, Polchin masterfully weaves brutal true crime research with critical analysis of the social history, exploring the way the media and nascent psychological theories were weaponizing prejudice and perpetuating a deviant stereotype of gay men.” —CrimeReads, One of the Most Anticipated Crime Books of Summer

“Polchin’s deep dive into the history leading up to the riots underscores the difficulty of telling a story that’s so bound up in myth—and the importance of doing it anyway . . . Polchin pulls the lives out of the archives with relentless precision in his book. The particularity of Polchin’s accounts restores some honor to the memory of the men whose brutal stories tell.” —Jason Tougaw, Electric Literature

“James Polchin wants us to have the specifics. His book Indecent Advances, published this month by Counterpoint, collects and analyzes news reports of gay–related crime from the 1920s to the 1960s. The result is an act of witnessing that will reconfigure anyone who came of age after Stonewall. Once we know all this, we have to reckon differently with our country . . . It’s almost unbearable to see this pattern of shame and violence so clearly laid out. How do we cope with these victims, who were only guilty of trying to exist? How do we accept that many of these murderers seem to have been gay men themselves, warped by self–loathing until they massacred their own? It’s beyond weeping. To his credit, Polchin never commands us to weep. His writing is unvarnished and unsentimental as he takes us chronologically through these decades of crime, and when the facts need context, he clearly explains how scientific, religious, and political forces of the time helped endorse these murders. And while there are moments when he allows himself some tart editorializing, he doesn’t linger over his own outrage. Instead, he trusts the details will make us angry on their own. In his wallop of a conclusion, though, Polchin does describe being haunted by his own research, as well as being deeply moved.” —Mark Blankenship, The Blotter

“One book I have found indispensable this summer has been Indecent Advances: A Hidden History of True Crime and Prejudice Before Stonewall . . . The history of social (in)justice runs deep . . . [A] tremendous addition to that legacy.” —Dave Wheeler, Shelf Awareness