James Polchin, PhD, has taught at the Princeton Writing Program, the Parsons School of Design, the New School for Public Engagement, and the Creative Nonfiction Foundation. A clinical professor at New York University, he lives in New York City with his husband, the photographer Greg Salvatori. Indecent Advances is his first book. 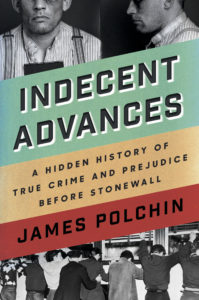 A Hidden History of True Crime and Prejudice Before Stonewall

Stories of murder have never been just about killers and victims. Instead, crime stories take the shape of their times and reflect cultural notions and prejudices. In this Edgar Award–finalist for Best Fact Crime, James Polchin recovers and recounts queer stories from the crime pages―often lurid and euphemistic―that reveal the hidden history of violence against gay men. But what was left unsaid in these crime pages provides insight into the figure of the queer man as both criminal and victim, offering readers tales of vice and violence that aligned gender and sexual deviance with tragic, gruesome endings. Victims were often reported as having made “indecent advances,” forcing the accused's hands in self–defense and reducing murder charges to manslaughter.

As noted by Caleb Cain in The New Yorker review of Indecent Advances, “it’s impossible to understand gay life in twentieth–century America without reckoning with the dark stories. Gay men were unable to shake free of them until they figured out how to tell the stories themselves, in a new way.” Indecent Advances is the first book to fully investigate these stories of how queer men navigated a society that criminalized them and displayed little compassion for the violence they endured. Polchin shows, with masterful insight, how this discrimination was ultimately transformed by activists to help shape the burgeoning gay rights movement in the years leading up to Stonewall.