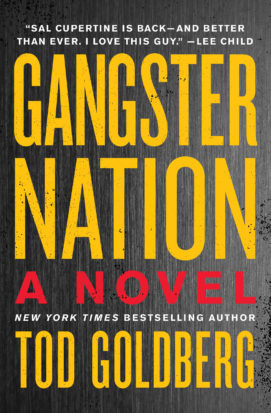 “Sal Cupertine is back—and better than ever. I love this guy.” —Lee Child

“Gangster Nation is a razor. It will slice you open and reveal your insides. And like the best of Tod Goldberg’s work, it’ll show you everything you are at your core.” —Brad Meltzer, New York Times bestselling author of The President’s Shadow

It’s been two years since the events of Gangsterland, when legendary Chicago hitman Sal Cupertine disappeared into the guise of Vegas Rabbi David Cohen. It’s September of 2001 and for David, everything is coming up gold: Temple membership is on the rise, the new private school is raking it in, and the mortuary and cemetery—where Cohen has been laundering bodies for the mob—is minting cash. But Sal wants out. He’s got money stashed in safe–deposit boxes all over the city. He’s looking at places to escape to, Mexico or maybe Argentina. He only needs to make it through the High Holidays, and he’ll have enough money to slip away, grab his wife and kid, and start fresh.

Across the country, former FBI agent Matthew Drew is now running security for an Indian Casino outside of Milwaukee, spending his off–time stalking members of The Family, looking for vengeance for the murder of his former partner. So when Sal’s cousin stumbles into the casino one night, Matthew takes the law into his own hands—again—touching off a series of events that will have Rabbi Cohen running for his life, trapped in Las Vegas, with the law, society, and the post–9/11 world closing in around him.

Gangster Nation is a thrilling follow–up to Gangsterland, an unexpected, page–turning examination of the seedy foundations of American life. With the wit and gritty glamor that defines his writing, Goldberg traces how the things we most value in our lives—home, health, even our spiritual lives—have been built on the enterprises of criminals.

"One can’t help but think of such greats as Mario Puzo, Jimmy Breslin, Elmore Leonard, and Donald E. Westlake while reading this witty, brutal, vital book. Goldberg is a master, expertly building upon the grim goings–on of Gangsterland, merrily pursuing plot points set up there to their logical, wicked ends. And, as if the impressive buildup of tension weren’t sufficient, he ends the current installment on a cliff hanger of truly epic proportions, setting up what appears to be the forthcoming and final installment of the Gangster trilogy. This reviewer is already getting itchy, waiting for that welcome denouement." —Mystery Scene Magazine

"Not only religion but family (what is the mafia if not a family?) and community are dissected in Goldberg’s sharp satires, which also happen to be excellent crime novels." —LitHub, 1 of 6 Crime Must–Reads This September

"Written with humor and the same type of dark, up–close–and–personal style of dialogue that Don Winslow is known for, Goldberg also mixes in some eyebrow–raising historical facts about how criminals (of all types, but especially gangsters) have shaped and changed America throughout the country’s history. A touch better than its predecessor (Gangsterland), Goldberg’s latest novel is a bold and daring adventure that hits hard early on and never lets up. The story twists and turns its way to a surprising ending, setting things up nicely for the planned third and final book in the Sal Cupertine trilogy, The Death of a Gangster." —The Real Book Spy

"While Gangster Nation contains a great deal of humor, at least when talking about the members of the synagogue, the novel takes a more serious turn after the events of 9/11 . . . The novel’s cliff–hanger ending . . . will leave readers eager to discover what happens next." —The Reporter Group

"Goldberg’s new novel is every bit as entertaining and at least as quirky as its predecessor—not an out–and–out comedy but certainly lighter than most books featuring organized crime figures and crazed law enforcers (although there are moments of memorable darkness). The book can be read as an installment in a series or as a stand–alone; Goldberg provides enough background to allow newbies to pick up the important plot threads." —Booklist

"The sequel conducts extended discussions on how America is defined by crime, boldly linking gangland violence to the 9/11 attacks . . . Sal/David's mixing of Talmudic citations with Bruce Springsteen lyrics is still very funny. The sacred gets the stuffing kicked out of it by the profane in this wild and sometimes–shocking novel." —Kirkus Reviews

"Sal Cupertine is back—and better than ever. I love this guy." —Lee Child

"Gangster Nation is a razor. It will slice you open and reveal your insides. And like the best of Tod Goldberg's work, it'll show you everything you are at your core." —Brad Meltzer, New York Times bestselling author of The President's Shadow

Gangsterland was compelling in every way, and in Gangster Nation, its sequel, Tod Goldberg has written an enthralling portrait of consequences—emotional, physical, moral, you name it. Amid all the expertly choreographed violence and intrigue is a moving, thought–provoking story about the fluid nature of identity, spirituality, and love. I enjoyed every page." —Vu Tran, author of Dragonfish

"Gangster Nation punches even harder than the excellent Gangsterland did: against the backdrop of 9/11, everybody’s roughed up and bleeding, and nobody’s hiding it well. Tod Goldberg’s weird world is getting The Sopranos–good, and The Sopranos–funny: he can hit you high, low, or straight in the gut. Meshugener wiseguys. It’ll make you a better killer—and a better rabbi.” —Bill Beverly, author of Dodgers