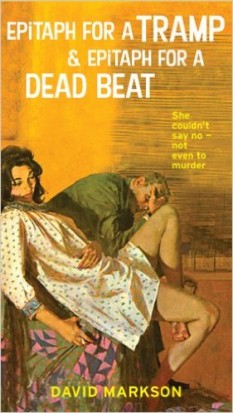 Before achieving critical acclaim as a novelist, David Markson paid the rent by writing several crime novels, including two featuring the private detective Harry Fannin. Together here in one volume, these works are now available to a new generation of readers.

In Epitaph for a Tramp, Fannin isn’t called out to investigate a murder — it happens on his doorstop. In the sweltering heat of a New York August night, he answers the buzzer at his door to find his promiscuous ex–wife dying from a knife wound. To find her killer, Fannin plies his trade with classic hard–boiled aplomb. In the second novel, Epitaph for a Dead Beat, Fannin finds himself knee–deep in murder among the beatniks and bohemians of the early 1960s, where blood seems to flow as readily as cheap Chianti.