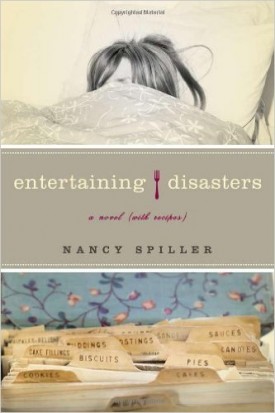 A Novel (With Recipes)

“This zany novel will make you appreciate your own fallen soufflés that much more.” —Redbook

The writer known only as FW lives high on the food chain in the heady realm of L.A.s culinary journalism scene. She waxes poetic about her hip home gatherings, thinly veiling the identities of her Hollywood guest list. At least, it seems that way to her readers. In reality, FW’s been inventing the dinner parties she writes about because social paralysis sets in at the very thought of a real guest in her fabulous—or is it shabby?—hillside home.

Enter the glossy food magazine editor, new in town, who wants an invitation to one of her bashes, and the panic–stricken journey from fantasy to reality is on . . .

Entertaining Disasters—at turns whimsical and deeply affecting—chronicles the struggle FW faces in the week before she hosts her first real dinner party in ages. At the same time, her estranged sister threatens to drop by, her husband takes off, and even more disaster looms, in this “funny, satirical novel” (Booklist) that “offers sharp, startling observations in a unique and very human voice” (Elle).

Nancy Spiller is a writer and artist currently living in Los Angeles. A third generation California native, she was born and raised in the San Francisco Bay Area and is a graduate of San Francisco State University. She served as staff feature writer at the San Jose Mercury News and its Sunday magazine, West , and at the Los Angeles Herald Examiner. She was editor and internationally syndicated columnist for the Los Angeles Times Syndicate's Entertainment News Service. Her essays and articles have appeared in numerous magazines and newspapers including the Los Angeles Times Sunday Magazine, McCall's, Mother Jones, Salon.com, and Coagula Art Journal. Her fiction has appeared in the Rain City Review.

She has studied art at the Pasadena Art Center College of Design and UCLA. Her recent installation and exhibition at L.A. Contemporary Gallery in Culver City, Reverse Trash Streams: The Junk Mail Project, featured 157 pounds of shredded junk mail, the result of one year's worth collected at her home, accompanied by her Shredded series of paintings and drawings. Art in America lauded it for its humor, resigned pathos and concern with larger social issues. She lives with her husband Tom, their dog and two cats at the edge of a preserved coastal canyon on Los Angeles' wild western edge.
Praise
"[Entertaining Disasters] is an extended brood on food, love, family, and the exhausting rat race of L.A. . . . it offers sharp, startling observations in a unique and very human voice." —Elle

"This zany novel (with recipes) will make you appreciate your own fallen souffles that much more." —Redbook

"With deftness and wit, Nancy Spiller delivers needle–sharp insights into middle–class life and marriage, while portraying the dissolution of a family and the rise of longing for a culinary salvation." —Janet Fitch, author of White Oleander and Paint It Black

"Cooking, we begin to see, allows FW to do what her family could not—meld warring ingredients into a harmonious whole. The looming dinner party is her bid for psychic as well as social redemption . . . Entertaining Disasters offers memoir's most potent pairing: the child's eye, sensual and vindictive, with the grown–up's aching heart . . . it's a testament to Spiller's skill as a narrator that tragedy and comedy begin to seem like a natural couple and that feeding a gathering of friends is the ultimate modern ordeal." —Ariel Swartley, Los Angeles Magazine