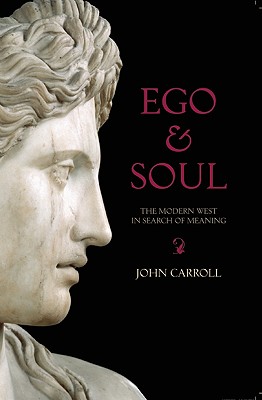 The Modern West in Search of Meaning

The crisis of meaning is the issue of our time. The old beliefs that guided the West have faded, without credible replacement. Who lives well? What characterizes the good life? More particularly, what may we in the modern West claim about ourselves? And, ultimately, does how we live and what we do make any sense? Concerned for today’s society and its problems as they relate to meaning, faith, belief, morale, moral attachment, and social direction, John Carroll surveys these questions in Ego and Soul. He examines how people in their ordinary and everyday lives grope unconsciously for direction, casting lines into the transcendent in the hope of a catch. He focuses on the main areas of modern life—work, sport, popular culture, family, friendship, intimacy, shopping, tourism, computers, cars, do–it–yourself renovation, our democratic temper, and the retreat into nature. He also examines high culture, the upper–middle–class elites, and the universities, tracing why they have lost their way and failed to provide a language that might help modern people understand their condition. Ego and Soul offers a surprising and compelling new look at the way we live today, and the way we try to make sense of our lives.

John Carroll is Professor Emeritus of Sociology at La Trobe University in Melbourne, Australia. He has degrees in mathematics, economics and sociology from the universities of Melbourne and Cambridge. His work focuses on culture, and its crucial role in the human search for meaning, with particular reference to the modern Western society.

Praise
Praise for the Australian edition:

"Ego & Soul virtually stands alone within Australia as a genuine attempt by an academic sociologist to deal with the crisis of meaning that is felt everywhere in the wider community, especially in youth culture." —Australian Book Review

"A film producer said at the celebration of Orson Welles' jubilee that the guest of honor was a Great Man—a man being great when he does not remind one of anyone else". By the standards this definition sets Ego and Soul is a Great Book. For me, derivativeness and secondarity are the most ghastly and morbid enemies of both ego and soul. This book manages to castrate and disarm both." —Zygmunt Bauman

"Ego & Soul is written with clarity and is for anyone who wants to explore the reasons behind some of the perplexing cultural problems that face us today. Four–and–a–half stars." —Bookseller & Publisher

"Ego & Soul cleverly examines the problems of being human in the 21st century." —The Courier Mail