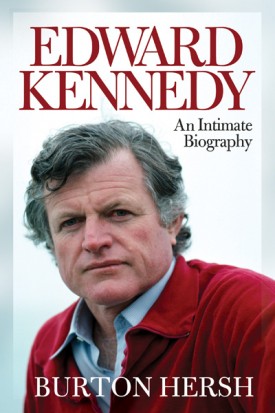 In this groundbreaking biography of Edward Kennedy, historian and journalist Burton Hersh combines a lifetime of research and reporting with a lively mixture of never-before-told anecdotes (including the definitive version of the incident at Chappaquiddick, the details of which Kennedy himself filled in for Hersh shortly after it occurred) to create a broad yet unfailingly intimate portrait of the politician who would be universally acknowledged as one of the twentieth century’s greatest American legislators.

Hersh was acquainted with Kennedy since his college days, and the result here is a unique series of revelations that serve to reinterpret the senator’s public and private personas. Conditioned by deep-seated fears that he was an afterthought within his own powerful family, Kennedy developed a genius for conciliation and strategizing that made him a dramatically more effective political figure than either of his older brothers. In addition to this biography’s account of the Chappaquiddick incident, Hersh also delivers the first full report of the vendetta between Kennedy and Richard Nixon, exposing the behind-the-scenes manipulations to which Kennedy resorted to drive Nixon from office during the Watergate scandal.

About Burton Hersh
Praise
Praise for Edward Kennedy "Hersh, a Harvard classmate of the future senator . . . makes good use of sources going back six decades to paint a personal portrait." --Jonathan Alter, The New York Times Book Review "For readers exhausted at the thought of another Ted Kennedy biography, this one is beautifully written and exquisitely detailed with plenty of new material drawn from investigation and interviews with Kennedy and his family, friends, and colleagues, as well as some impressions by historian Hersh, a friend of Kennedy's since childhood. There's the family history: driven Joe Kennedy, about whose philosophy of cutthroat competition, Hersh writes: "Nothing here the Corleones wouldn't rubber-stamp." Ted was born last in a large brood of overambitious, outsize personalities, so he developed the skills for gregariousness and conciliation that would serve him well in politics. All the usual history is here: the dirty politics of each Kennedy's career climb, the assassinations of John and Robert, Ted's stoic taking up of the Kennedy mantle, Chappaquiddick, the drinking, the affairs, and redemption, but it is fleshed out with previously undisclosed ruminations by Kennedy and the people who knew him well. Hersh also offers new insights on the accident that nearly destroyed Kennedy's political life, the drowning of Mary Jo Kopechne. Part 1 contains mesmerizing analysis of the personal dynamics between the famous Kennedy brothers and Ted's self-doubts and eventual mastery of the political game. Part 2 focuses on Kennedy's growth in the powerful position of "shadow president," the man who, though he failed to achieve what at one time had been considered inevitable, nevertheless wielded enormous political power and influence. Totally riveting." --Booklist (starred review) "In the end it was Ted Kennedy, the scapegrace kid brother, who stood for something, passed important laws, defended liberal principles, and had the most substantial career. No one has known Teddy longer, followed that career more closely, or written more seriously or at greater length about the last Kennedy than Burton Hersh. His new book on Teddy draws on all its predecessors and adds substantial new material to create a magisterial political biography of the Kennedy who added real substance to the fleeting promise of his brothers." --Thomas Powers "I think your readers will enjoy the trip. As a would-be historian, I was much impressed by the extent and depth of your research, by its specificity of detail, and by your skill in presenting a scene and pinpointing the Dramatis Personae . . . I think you are admirably even-handed. You have written a warts-and-all biography, not a hagiography, although you aren't disloyal to your man. In the end, the hero eclipses the slob, but you don't slight his moral infirmity and you present him without tears . . . let me commend the biography's structure and thoroughness, its solidity and pace. I hope it gets the attention it deserves." --Daniel Aaron, from a letter to the author