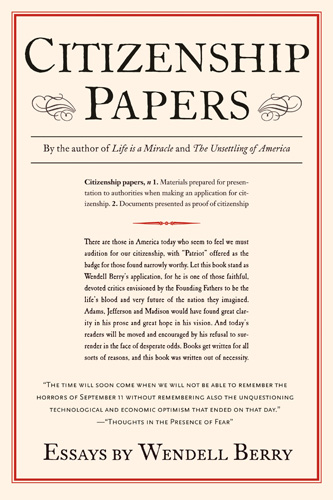 “[Berry’s] refusal to abandon the local for the global, to sacrifice neighborliness, community integrity, and economic diversity for access to Walmart, has never seemed more appealing, nor his questions of personal accountability more powerful.”—Kirkus Reviews

There are those in America today who seem to feel we must audition for our citizenship, with “patriot” offered as the badge for those found narrowly worthy. Let this book stand as Wendell Berry’s application, for he is one of those faithful, devoted critics envisioned by the Founding Fathers to be the life’s blood and very future of the nation they imagined.

Citizenship Papers collects nineteen new essays, from celebrations of exemplary lives to critiques of American life, including “A Citizen’s Response [to the new National Security Strategy]”—a ringing call of caution to a nation standing on the brink of global catastrophe.

“The courage of a book, it has been said, is that it looks away from nothing. Here is a brave book.” —The Charlotte Observer

“Berry says that these recent essays mostly say again what he has said before. His faithful readers may think he hasn’t, however, said any of it better before.”—Booklist (starred review)