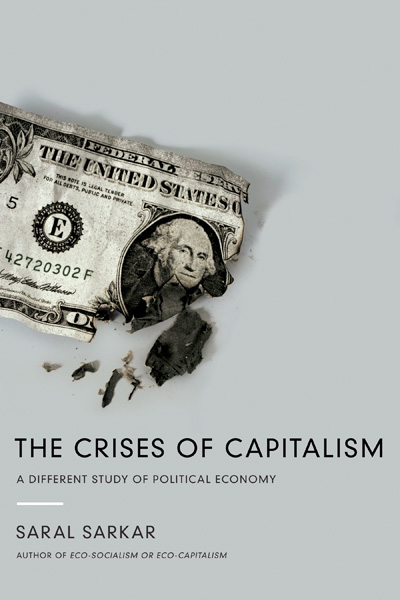 The Crises of Capitalism

A Different Study of Political Economy

For nearly 300 years, capitalism propelled the world’s most successful economies to new heights of development. But a spate of global environmental disasters and severe economic crises compels thinkers to question whether the system continues to function. Leveraging historical perspective, extensive research, and case studies, The Crises of Capitalism builds a compelling argument that challenges the most fundamental assumptions of prevailing economic theory.

Saral Sarkar exposes capitalism’s flaws through the lens of ecosocialism, a philosophy that asserts that natural resources drive production and development. Keynes, Schumpeter, Marx, and Engles had no reason to believe that there would ever be a shortage of oil, minerals, water, or food—and that technological innovation could surmount any obstacle. But oil extraction has peaked, food is harder to come by, and the cost to maintain what natural resources remain has increased exponentially. Capitalism requires constant innovation to create growth—but as Sarkar establishes, even computers wouldn’t exist without copper, gold, and zinc.

The Crises of Capitalism exists at the intersection of environmental awareness and economic theory. Sarkar challenges predominant explanations for catastrophic events like the 2008 global economic crisis, revises the classic paradigm of growth, and points to evidence of systemic economic failure. In this provocative, revolutionary criticism, Sarkar suggests that like other long–abandoned economic theories, capitalism has reached its limits.

“This is an important book, and it is on the front edge of the thinking that has to come to bear on the real crisis the world is facing, of the impossible idea of growth forever and the economic model that is driving the planet into irreversible crises.” —Doug Tompkins

Saral Sarkar was a lecturer at the Goethe Institute, Hyderabad, and is a leading proponent of ecosocialism. He has published several works including Green–Alternative Politics in West Germany and Eco–Socialism or Eco–Capitalism?: A Critical Analysis of Humanity's Fundamental Choices.

Saral Sarkar was a lecturer at the Goethe Institute, Hyderabad, and is a leading proponent of ecosocialism. He has published several works including Green–Alternative Politics in West Germany and Eco–Socialism or Eco–Capitalism?: A Critical Analysis of Humanity's Fundamental Choices.

Praise for The Crises of Capitalism

"For those who passionately believe that innovation can no longer prolong capitalism, that the end of the Oil Age is near, that dwindling resources and today's dangerously unstable economic moment point to "ecological socialism as the only convincing alternative," Sarkar's text supplies the requisite theoretical scaffolding" —Kirkus<//p>
Don't miss news & events from Counterpoint Press.
Subscribe to the newsletter today.