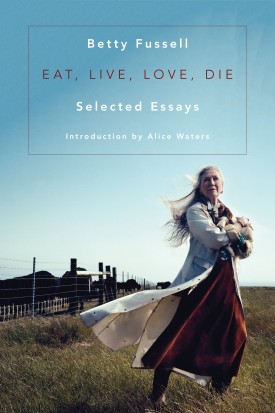 Betty Fussell is an inspiring badass. She’s not just the award–winning author of numerous books ranging from biography and memoir to cookbooks and food history; not just a winner of the James Beard Foundation’s Journalism Award who was inducted into their “Who’s Who of American Food and Beverage” in 2009; and not just an extraordinary person whose fifty years’ worth of essays on food, travel, and the arts have appeared in scholarly journals, popular magazines and newspapers as varied as The New York Times, The New Yorker, The Los Angeles Times, Saveur, and Vogue.

This is a woman who at eighty–two years old (and despite being half–blind) went deer hunting for the very first time in the Montana foothills with her son, Sam (as described in her 2010 essay for the New York Times Magazine.) She got her deer.

This is a woman who declared in a 2005 essay for Vogue that she had to teach herself Latin and German from scratch (on top of teaching herself how to cook) as a young twenty–one year old bride, because “housewifery wasn’t enough.”

Indeed, for Fussell one subject is never enough. Counterpoint is thrilled to be publishing this selected anthology of her diverse essays.

BETTY FUSSELL was born in Southern California in 1927. Her most recent book is Eat, Live, Love, Die. She was recently celebrated, along with other winners of the Silver Spoon Award, by Food Arts magazine.

"The opening essay of Fussell’s honest and evocative collection makes an argument for the relevance of food as an important literary subject... Fussell’s writing is so deeply felt and beautifully rendered that she makes every topic she chooses feel vital to the reader... The whole collection is this great. Whether she’s writing about food, her primary matter (though this covers everything from mayonnaise to Jell–O), her complex family life or culinary superstars like M.F.K. Fisher and Alice Waters (who provides the introduction here), Fussell is a gifted essayist and a meditative thinker, as enriching and relevant as she makes her subjects." —New York Times Book Review

"Award–winning writer Betty Fussell’s essay collection Eat, Live, Love, Die reveals a splendid mind, a masterful touch, and the high points of an honorable career. She is one of the culinary world’s treasures."—Wall Street Journal

"She's one nasty woman, that Betty Fussell. Now 89, Fussell came of age in the heyday of bright and breezy Bettys — Betty Grable, Betty Hutton, Betty Crocker — but she clearly gravitated toward the one dangerous dame of the bunch, Bette Davis.... [L]et me quickly add that Fussell is also very funny and inspiring. Some of the best essays here are the most recent, written in Fussell's dotage. Aging is a hot literary topic these days, but no one else I've read has captured the bizarre acceleration of time as we age quite the way Fussell does... Move over T. S. Eliot; [her essay on aging] is charged, spoken–word poetry on the eternal theme of "Hurry up please it's time." Fussell is said to be writing a second memoir, this one a "manual of survival in New York City." Hurry up, please, I can't wait." —Maureen Corrigan for NPR's "Fresh Air"

"The idiosyncratic food writer harvests some of her best work in a savory collection that doubles as a memoir and declaration of faith… A dazzling showcase for Fussell's delicious ability to 'taste...words with the kind of pleasure that turns cooking fires into the fires of love.'"—Kirkus, starred review

"A restless intelligence and energy pulses under the surface of these essays, even when the topic is as banal as the deliciousness of French chicken... Whatever the subject at hand, Fussell meets the chief requirement of the essayist: She’s good company. Opinionated and sometimes caustic, she moves easily from high to low, from the scholarly to the deeply personal. She is as comfortable singing the praises of hamburgers as she is souffle au calvados, as confident in her allusions to 1930s radio jingles as in her quotations from Andrew Marvell."—The Washington Post</i?