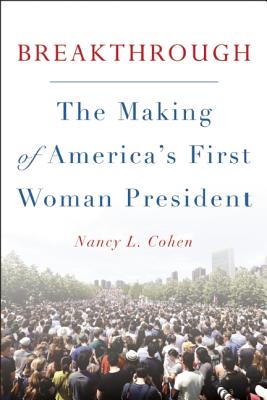 Why Americans have never elected a woman president, how we changed to make it possible, and why it matters.

From Hollywood to the halls of Congress, a lively conversation about women’s leadership, equal pay, and family–work balance is underway. On the cusp of a historic breakthrough—the potential election of America’s first woman president—Nancy L. Cohen takes us inside the world of America’s women political leaders. Drawing on hundreds of hours of interviews with women governors and senators from both parties, experts, political operatives, and a diverse array of voters, Breakthrough paints an intimate portrait of the savvy women who’ve built an alternative to the old boys club and are rewriting the playbook for how women succeed in politics. In this accessible and often surprising story, Cohen introduces us to the inspiring women behind the women who have brought us to this threshold, and to a dynamic group of young leaders who are redefining how we think about leadership, feminism, and men’s essential role in achieving gender equality. Breakthrough takes on our cultural assumptions to show that the barriers that once blocked a woman’s ascent to the presidency have fallen, even more than we realize.

Nancy L. Cohen is a historian and author of four books, including the widely acclaimed Delirium: The Politics of Sex in America and The Reconstruction of American Liberalism. Her writing on American politics has appeared in the Guardian, the Los Angeles Times, the New Republic, Rolling Stone, and other publications. She has taught politics and history at Occidental College, UCLA, and Cal State Long Beach. Cohen serves as a commissioner on the Los Angeles County Commission for Women. She lives in Los Angeles with her husband and two daughters.

Praise
"A great account of the commitment, camaraderie, and capability of the women who've worked to better our nation." —U.S. Senator Barbara A. Mikulski

"A must read. Nancy L. Cohen's insightful observations in Breakthrough highlight the importance of women's political leadership and the challenges all of us have faced to win."
—Wendy Greuel, former Los Angeles City Controller and Los Angeles Councilmember

"Intellectually, Nancy L. Cohen convincingly makes the case for why it is essential that our democracy include women at the table, not just for representation's sake, but for the better outcomes that come from involving all perspectives. Emotionally, Breakthrough reignites the passion and optimism of those who have been fighting for this for so long, too long, and simultaneously inspires those who are new to this fight." —Sandra Fluke, Social Justice Attorney

"If ever there were a time in America's history when a woman could reach the Oval Office, this might just well be it. Why now? Why not sooner? A nationally recognized historian and expert on women in politics, Cohen's interviews with trailblazing women elected officials, NGO executives, pollsters, and grassroots organizers sheds important light on the dividing and cohesive elements certain to influence the next presidential election. Whether one thinks Hillary Clinton is a shoo–in or long shot, Cohen's well–reasoned and researched treatise illuminates this defining moment in American history." —Booklist

"In her brisk analysis, Cohen feels optimistic that the next election will cross 'a historic threshold.'" —Kirkus