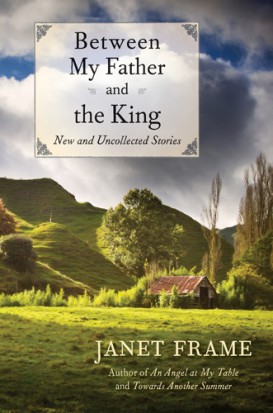 Between My Father and the King

This brand new collection of 28 short stories spans the length of Frame’s career and contains some of the best she wrote. None of these stories have been published in a collection before, and more than half are published for the first time in Between My Father and the King.

The piece ‘Gorse is Not People’ caused Frame a setback in 1954, when Charles Brasch rejected it for publication in Landfall and, along with others for one reason or other, deliberately remained unpublished during her lifetime. Previously published pieces have appeared in Harper’s Bazaar, the NZ Listener, the New Zealand School Journal, Landfall and The New Yorker over the years, and one otherwise unpublished piece, ‘The Gravy Boat’, was read aloud by Frame for a radio broadcast in 1953.

In these stories readers will recognize familiar themes, scenes, characters and locations from Frame’s writing and life, and each offers a fresh fictional transformation that will captivate and absorb.

Praise
"This new collection of 28 short stories that span [Frame's] career (many of which have never been published) showcases her extraordinary gifts as an imaginative storyteller with a singular viewpoint. . .These stories—with themes of despair, disappointment, and wonder, underscored by Frame's melancholy and vivid turns of phrase—are beautifully rendered." —Publishers Weekly (starred review)

"Frame's ability to distill an experience and sometimes an entire life into a few pages was remarkable. Her characters yearn, and ache, and are overtaken by wonder. She was an emotional cartographer of the highest order, one who deeply understood the inner workings of the human heart."—The Rumpus

"The title story stands as the epitome of her traits and merits in the short form. It is a tight, first–person, tongue–in–cheek remembrance of the narrator's father's debt to the English king for money borrowed to buy new furniture—and of how the king's representative just might stop in at any time to make certain the furniture is being well taken care of! This and all the other stories in the collection demonstrate writerly genius in every sentence, are told with charming and often wicked wit, boast visual images conjured with nimble wordplay ("The sky sagged in the middle, there didn't seem to be enough head–room"), and display a warm intimacy between the author and her prose as she writes close to the psychological and autobiographical bone."—Booklist

"Frame’s stories exist in liminal spaces, which doesn’t always make for comforting reading. But as this collection proves, that only makes her unique voice more indispensable." —Publishers Weekly