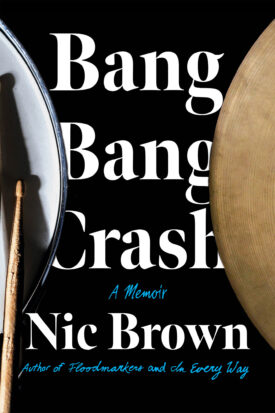 In the mid-1990s, fresh out of high school, Nic Brown was living his childhood dream as a rock and roll drummer. Signing a major label record deal, playing big shows, hitting the charts, giving interviews in Rolling Stone, appearing on The Tonight Show—what could be better for a young artist? But contrary to expectations, getting a shot at his artistic dream early in life was a destabilizing shock. The more he achieved, the more accolades that came his way, the less sure Brown became about his path.

Only a few years into a promising musical career, he discovered the crux of his discontent: he was never meant to remain behind the drums. In fact, his true artistic path lay in a radically different direction entirely: he decided to become a writer, embarking on a journey leading him to attend the Iowa Writers’ Workshop, publish novels and short stories, and teach literature to college students across the country.

Bang Bang Crash tells the story of Nic Brown’s unusual journey to gain new strength, presence of mind, and sense of perspective, enabling him to discover an even greater life of artistic fulfillment.