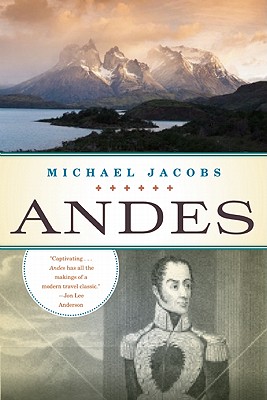 For centuries, the Andes have caught the imagination of travelers, inspiring fear and wonder. The groundbreaking scientist Alexander von Humboldt claimed that “”everything here is grander and more majestic than in the Swiss Alps, the Pyrenees, the Carpathians, the Apennines, and all other mountains I have known.”” Rivaled in height only by the Himalayas and stretching more than 4,500 miles, the sheer immensity of the Andes is matched by its concentration of radically contrasting scenery and climates, and the rich and diverse cultures of the people who live there.

In this remarkable book, travel writer Michael Jacobs journeys across seven different countries, from the balmy Caribbean to the inhospitable islands of the Tierra del Fuego, through the relics of ancient civilizations and the remnants of colonial rule, retracing the footsteps of previous travelers. His route begins in Venezuela, following the path of the great nineteenth–century revolutionary Simón Bolívar, but soon diverges to include accounts from sources as varied as Humboldt, the young Charles Darwin, and Bolívar’s extraordinary and courageous mistress, Manuela Saenz. On his way, Jacobs uncovers the stories of those who have shared his fascination and discovers the secrets of a region steeped in history, science, and myth.

"Andes is a travelogue that's scholarly and sociable in equal measure, by an author who's as interested in ferreting out letters from 16th–century emigrants lured by the legend El Dorado as he is in visiting a museum dedicated to Bolívar's mistress or checking out the transvestite bars of Ayacucho." —New York Times Book Review

"The writing . . . doesn't have a bump in it. Jacobs is a natural wordsmith with an easy style and an engaging manner. He is the quintessential alien adrift in a quirky land and, like many a 19th–century English traveler before him, relishes telling us just how strange South Americans can be." —Washington Post

"Even a reader with no prior interest in the Andes, or South America in general, can't help but be captivated by this Englishman's Andean odyssey . . . Andes is an engrossing read, written with historical depth, dry wit and moments of endearment." —Globe and Mail

"Filled with encounters with diverse, colorful characters as well as the ghosts of near–vanished Native American civilizations . . . absorbing and charming." —Booklist