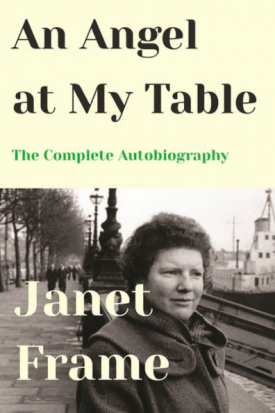 An Angel at My Table

The autobiography of New Zealand’s most significant writer

New Zealand’s preeminent writer Janet Frame brings the skill of an extraordinary novelist and poet to these vivid and haunting recollections, gathered here for the first time in a single volume. From a childhood and adolescence spent in a poor but intellectually intense railway family, through life as a student, and years of incarceration in mental hospitals, eventually followed by her entry into the saving world of writers and the “Mirror City” that sustains them, we are given not only a record of the events of a life, but also “the transformation of ordinary facts and ideas into a shining palace of mirrors.”

Frame’s journey of self–discovery, from New Zealand to London, to Paris and Barcelona, and then home again, is a heartfelt and courageous account of a writer’s beginnings as well as one woman’s personal struggle to survive.

This book contains selections from the long out–of–print collection entitled Janet Frame: An Autobiography (George Brazillier, 1991), which itself was originally published in three volumes: To the Is–land, An Angel at My Table, and The Envoy from Mirror City.

Praise
"One of the greatest autobiographies written in this century ." — Michael Holroyd

"Frame grasps an image and the emotion behind it in a few spare words." —Publishers Weekly

"[Frame] is endowed with a poet's imagination, and her prose has beauty, precision, a surging momentum, and the quality of constant surprise..."—The Atlantic

"She meditates upon the disrelation between inner and outer landscapes, mental and physical colors, cruelty and the withdrawal from cruelty, the experience of chaos, of inexplicable evils, of broken perceptions..." —The New York Times