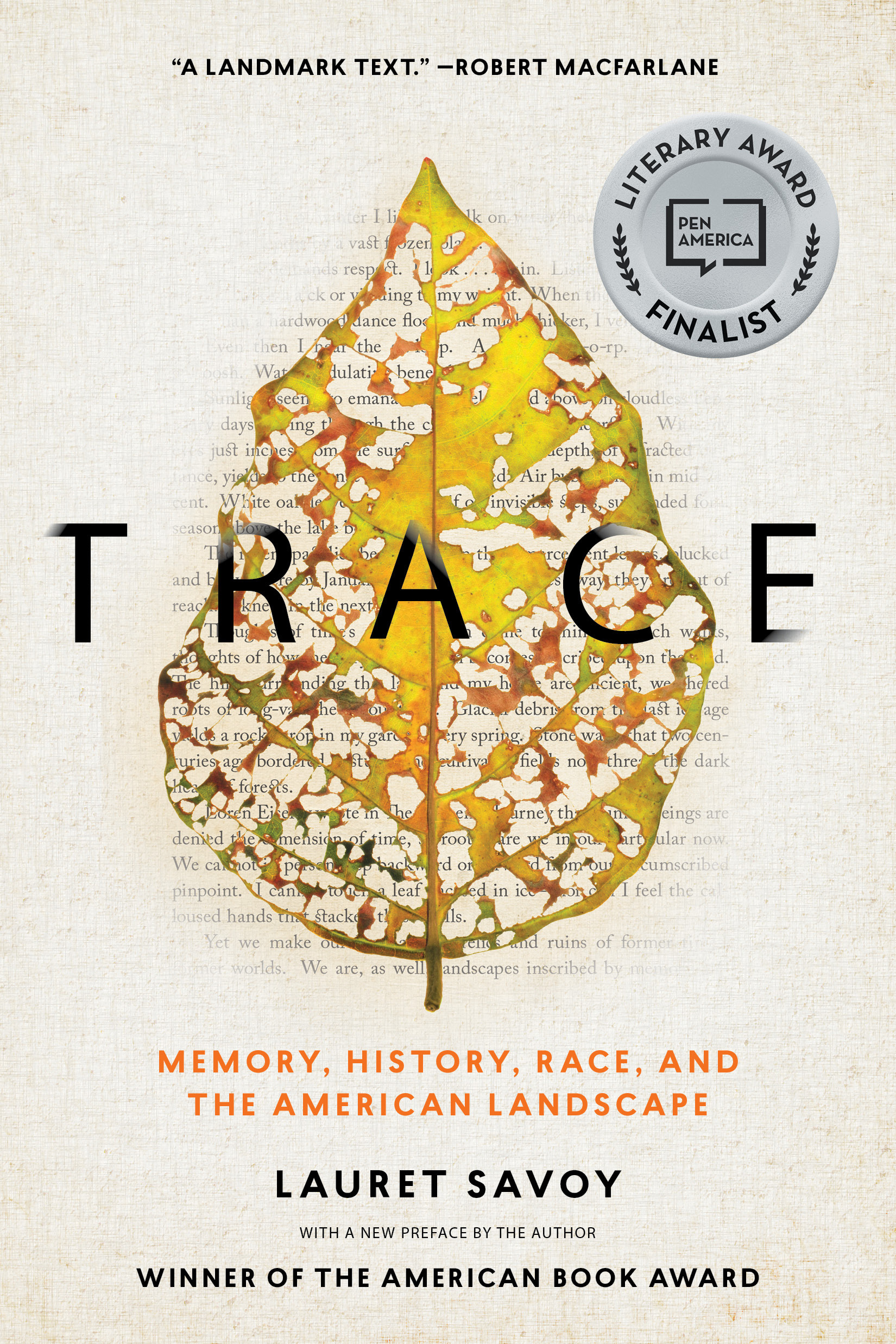 With a New Preface by the Author

Through personal journeys and historical inquiry, this PEN Literary Award finalist explores how America’s still unfolding history and ideas of “race” have marked its people and the land.

Sand and stone are Earth’s fragmented memory. Each of us, too, is a landscape inscribed by memory and loss. One life–defining lesson Lauret Savoy learned as a young girl was this: the American land did not hate. As an educator and Earth historian, she has tracked the continent’s past from the relics of deep time; but the paths of ancestors toward her—paths of free and enslaved Africans, colonists from Europe, and peoples indigenous to this land—lie largely eroded and lost.

A provocative and powerful mosaic that ranges across a continent and across time, from twisted terrain within the San Andreas Fault zone to a South Carolina plantation, from national parks to burial grounds, from “Indian Territory” and the U.S.–Mexico Border to the U.S. capital, Trace grapples with a searing national history to reveal the often unvoiced presence of the past.

In distinctive and illuminating prose that is attentive to the rhythms of language and landscapes, she weaves together human stories of migration, silence, and displacement, as epic as the continent they survey, with uplifted mountains, braided streams, and eroded canyons. Gifted with this manifold vision, and graced by a scientific and lyrical diligence, she delves through fragmented histories—natural, personal, cultural—to find shadowy outlines of other stories of place in America.

“Every landscape is an accumulation,” reads one epigraph. “Life must be lived amidst that which was made before.” Courageously and masterfully, Lauret Savoy does so in this beautiful book: she lives there, making sense of this land and its troubled past, reconciling what it means to inhabit terrains of memory—and to be one.

LAURET SAVOY is a woman of African American, Euro-American, and Indigenous ancestry, and the David B. Truman Professor of Environmental Studies & Geology at Mount Holyoke College, where she explores the stories we tell of the American land’s origins and the stories we tell of ourselves in this land. Her books include The Colors of Nature: Culture, Identity and the Natural World; Bedrock: Writers on the Wonders of Geology; and Living with the Changing California Coast.

“A thoughtful collection of essays . . . Savoy raises more questions than she answers, but they are the kind of questions that provoke discussion. This is not a book to be read quickly. Rather, each of the eight essays deserves consideration on its own . . . her images are often poetic and her personal revelations can be striking . . . the close read is worth the effort.”
—The Boston Globe

“Blends memoir, history, and the landscape to uncover hidden legacies. It will create seismic shifts in readers' perspectives on race, gender, and nature.”
—Kathryn Aalto, BuzzFeed

“Savoy is a geologist at Mount Holyoke, but this sui generis creation, wherein John McPhee meets James Baldwin, dissolves all academic boundaries. Trace is a memoir, a meditation on landscape and identity, and a travelogue with a mission. 'As an Earth historian,' writes Savoy, 'I once sought the relics of deep time. To be an honest woman, I must trace other residues of hardness.' Digging for her family roots in America’s tripartite legacy—natives, African slaves, and European settlers—she unearths some genealogy, but more fruitful are the connections she makes between philosophy, ecology, and race.”
—Vulture

“An earth historian by trade, Lauret Savoy journeys through the landscape—and her own roots—in this sweeping book that's part memoir, part travelogue, part scientific text. Savoy digs into her Native American, European and African–American history and maps her discoveries against our thoughts about place in this fascinating book.”
—The Huffington Post

“Springing from the literal Earth to metaphor, Savoy demonstrates the power of narrative to erase as easily as it reveals, yielding a provocative, eclectic exposé of the palimpsest historically defining the U.S. as much as any natural or man–made boundary.”
—Kirkus (starred review)

“[An] illuminating treatise . . . 'Each told fact holds meaning to the recorder, and each historical narrative (re)presents accidental and deliberate silences or omissions,' Savoy writes. As she assuredly shows, these silences can be telling, reminding us to watch for bias, and that when it comes to interpreting history, the viewing lens is almost as important as the narrative.”
—Booklist

“In reverential, elegiac prose, Savoy . . . meditates on the meaning of history and identity as related to place. Savoy’s deep knowledge of the land opens up intriguing new avenues for exploring the multifaceted, tumultuous nature of American identity.”
—Publishers Weekly

“A stunning excavation and revelation of race, identity, and the American landscape. I have never read a more beautiful, smart, and vulnerable accounting of how we are shaped by memory in place. This braiding of personal history with geology and the systematic erasure of “Other” in pursuit of Manifest Destiny is a stratigraphy of conscience and consciousness. What Lauret Savoy creates on the page is as breathtaking as the view she saw as a child as she stood on the edge of the Grand Canyon with her parents and learned land does not hate, people do. I stand in awe of Lauret Savoy's wisdom and compassionate intelligence. Trace is a crucial book for our time, a bound sanity, not a forgiveness, but a reckoning.”
—Terry Tempest Williams, author of When Women Were Birds, Finding Beauty in a Broken World, and Refuge: An Unnatural History of Family and Place

“As an Earth historian, [Savoy] reads the land with an informed eye. As a woman of mixed heritage, she reads into the land the lives of enslaved laborers and displaced tribes. This is a work of conscience and moral conviction. Reading it I understood how the land holds the memory of our history and how necessary it is to listen to its many voices.”
—Alison Hawthorne Deming, author of Zoologies: On Animals and the Human Spirit

“Lyrical and authoritative . . . This is a book that will promote and help shape our nation's urgent conversation about race.”
—John Elder, author of Reading the Mountains of Home and Pilgrimage to Vallombrosa, editor of the encyclopedia American Nature Writers, and co–editor of The Norton Anthology of Nature Writing

“Concise, explicit, and marvelous . . . the gentle deconstruction of the historical sources is truly moving, potent, and convincing.”
—Gerald Vizenor, winner of the Lifetime Achievement Award from the Native Writers Circle of the Americas

“Lauret Savoy's writing reveals both the pain and the hope located in landscape, place, and name. It is a wonderfully powerful and deeply personal exploration of herself, through this American landscape.”
—Julian Agyeman, author of Sustainable Communities and the Challenge of Environmental Justice

“The narrator is an engaging figure, sharing with us her process of discovery, conveying her indignation without stridency (although stridency would have been justified), tracing her research, acknowledging her uncertainties, suggesting why this quest matters so deeply to herself and why it should matter to us.”
—Scott Russell Sanders, author of A Private History of Awe and A Conservationist Manifesto
Don't miss news & events from Counterpoint Press.
Subscribe to the newsletter today.