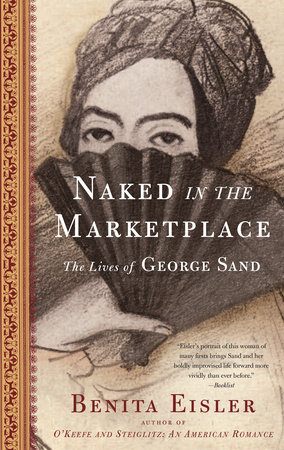 Naked in the Marketplace

The Lives of George Sand

Who was George Sand? She was the first famous Frenchwoman celebrated throughout Europe who wasn’t either a saint or a king’s mistress. She was also the first woman in Europe to become a best–selling novelist. But her fame is inseparable from her notoriety: the scandal of leaving a husband and child, setting up in Paris with an eighteen–year–old lover, liaisons and friendships with men of talent and even genius: de Musset, Chopin, Balzac, and Flaubert. Politically engaged, Sand was literally, “there at the revolution,” those of 1831 and 1848, reporting, analyzing, denouncing, exhorting. She believed always in Progress as she did in Love, though she was doomed to be betrayed in both. Acclaimed literary biographer Benita Eisler sheds new light on the many roles, triumphs, and losses that together constituted Sand’s overwhelming presence. With nearly ninety novels, 20,000 letters, and thousands of pages of autobiographical writings and political commentary, how did Sand also have the time to live? As Eisler reveals, hers seems more like several lives––literary, political, amorous, and domestic. Earlier biographers have either flash–frozen Sand into a feminist icon or blurred her in the dynamic of “child of the century,” but Naked in the Marketplace presents Sand at her essence––the outsized persona and the inner woman, along with the unique and irreplaceable role she played in the history of her times.

A native New Yorker, Benita Eisler was educated at Smith and Harvard. She has worked as an art editor, reporter, on–camera correspondent, and producer of arts programming for pubic television. Her interest in the varieties of artistic expression is reflected in her teaching and writing: She has taught the nineteenth– and twentiethcentury novel at Princeton and is the author of biographies of Georgia O'Keeffe and Alfred Stieglitz; Lord Byron, and Frédéric Chopin. She lives in Manhattan.

"Quite simply the best life of Byron we have."
Don't miss news & events from Counterpoint Press.
Subscribe to the newsletter today.