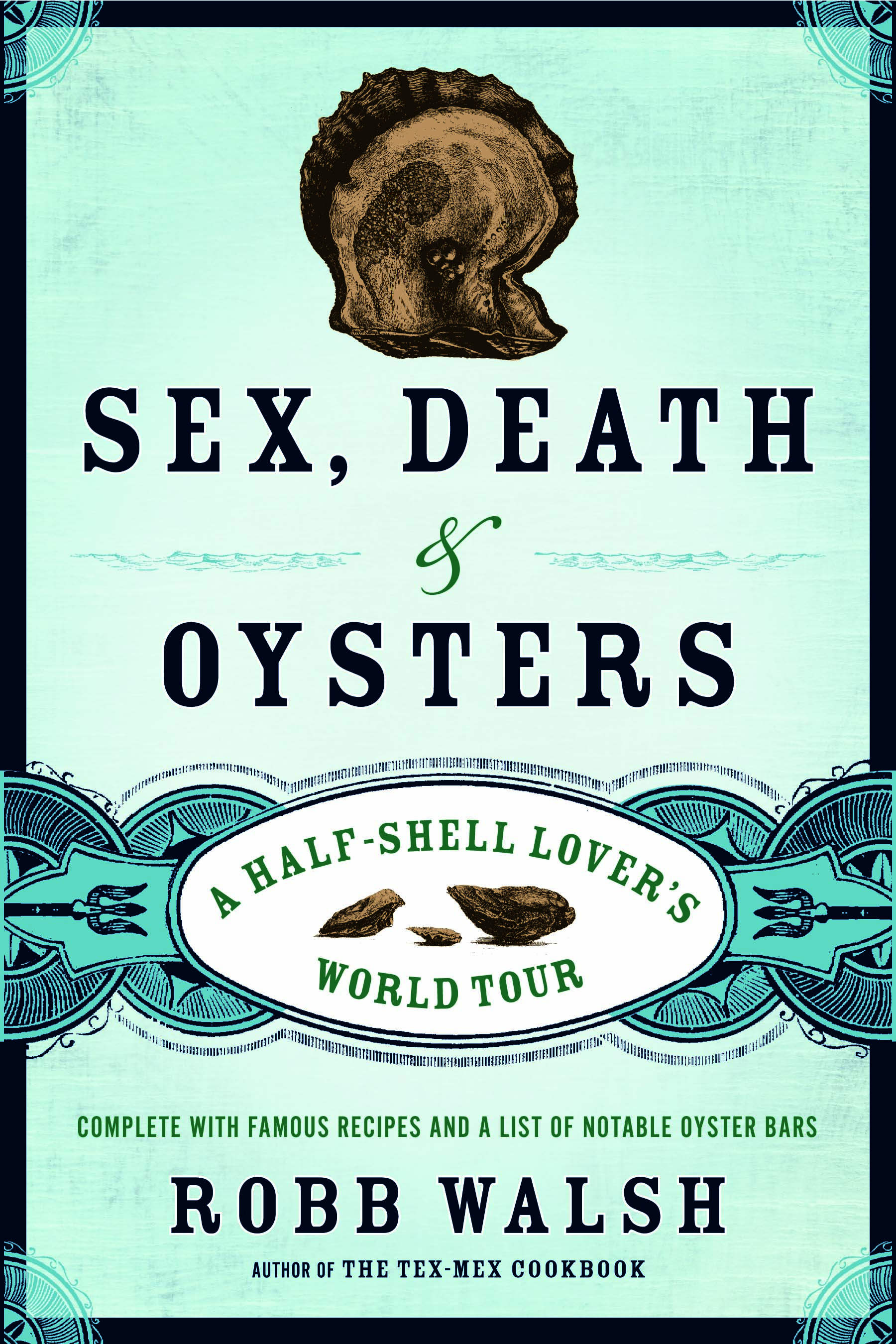 When award–winning Texas food writer Robb Walsh discovers that the local Galveston Bay oysters are being passed off as Blue Points and Chincoteagues in other parts of the country, he decides to look into the matter. Thus begins a five–year journey into the culture of one of the world’s oldest delicacies. Walsh’s through–the–looking–glass adventure takes him from oyster reefs to oyster bars and from corporate boardrooms to hotel bedrooms in a quest for the truth about the world’s most profitable aphrodisiac.

On the Atlantic, the Pacific, and the Gulf coasts of the US, as well as the Canadian Maritimes, Ireland, England, and France, the author ingests thousands of oysters—raw, roasted, barbecued, and baked—all for the sake of making a fair comparison. He also considers the merits of a wide variety of accompanying libations, including tart white wines in Paris, Guinness in Galway, martinis in London, microbrews in the Pacific Northwest, and tequila in Texas.

Sex, Death and Oysters is a record of a gastronomic adventure with illustrations and recipes—a fascinating collection of the most exciting, instructive, poignant, and just plain weird experiences on a trip into the world of the most beloved and feared of all seafoods.

Robb Walsh has been a food writer for 15 years. He has been the restaurant critic for the Houston Press since 2000 and was formerly the food columnist for Natural History magazine and the editor in chief of Chile Pepper magazine. He currently writes for Gourmet, Saveur, and other publications. He has been nominated for the James Beard Award 13 times and won twice. He has also won the Bert Greene Award for Newspaper Food Journalism as well as several awards from the Association of Food Journalists.

His books include The Texas Cowboy Cookbook, Legends of Texas Barbecue Cookbook, The Tex–Mex Cookbook, and Are You Really Going to Eat That?

"The further Walsh strays from his Texas roots the sharper his accounts . . . Aspiring gourmets will appreciate the recipes sprinkled throughout . . . A helpful, amusing, no–nonsense oyster manual for the layperson." —Kirkus Reviews

"Sex, Death & Oysters captures the Houston food writer at his best, offering culinary insight, scientific fact, and offbeat humor as he travels the globe in search of the truth about oysters." —Texas Monthly

"Ample oyster facts, figures and literary lore flesh out [Sex, Death & Oysters] . . . [Walsh] lists the oyster bars visited in the course of the book—along with several recipes—which will whet the appetites of aficionados." —Publishers Weekly

"Walsh's seemingly exhaustive research has produced a thorough look at the oyster industry, from its history to past and present politics." —Sauce Magazine

"If you love oysters, this is the book for you. And if you don't, try a Gulf Coast oyster between November and March, when they're the sweetest, says Walsh, and then see how you feel." —San Antonio Express–News
Don't miss news & events from Counterpoint Press.
Subscribe to the newsletter today.