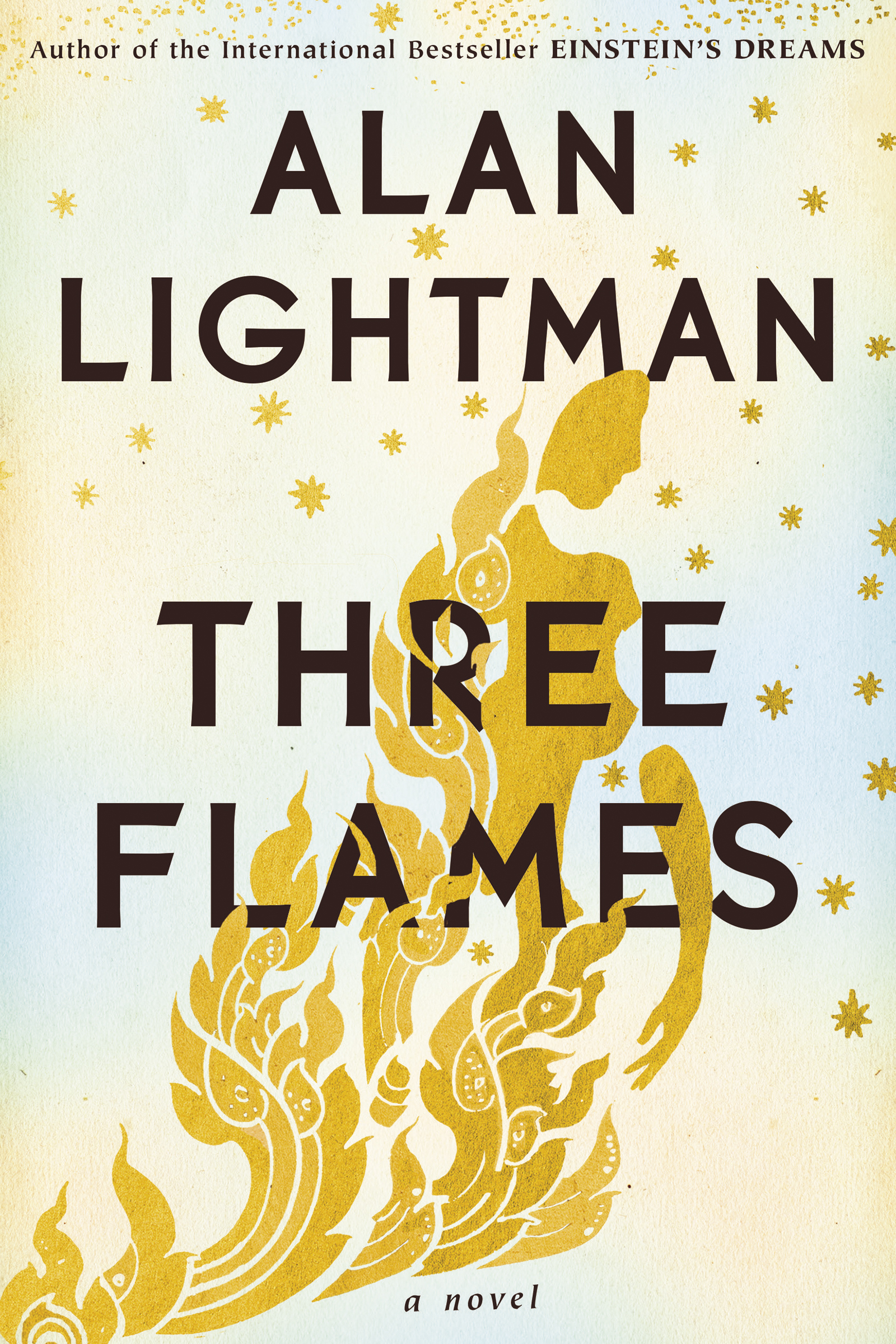 The stories of one Cambodian family are intricately braided together in Alan Lightman’s first work of fiction in seven years.

Three Flames portrays the struggles of a Cambodian farming family against the extreme patriarchal attitudes of their society and a cruel and dictatorial father, set in a rural community that is slowly being exposed to the modern world and its values. Ryna is a mother fighting against memories of her father’s death at the hands of the Khmer Rouge and her powerful desire for revenge. Daughter Nita is married off at sixteen to a wandering husband, while her sister Thida is sent to the city to work in the factories to settle their father’s gambling debt. Kamal, the only son, dreams of marrying the most beautiful girl in the village and escaping the life of a farmer. Yet it will be up to Sreypov, the youngest, to bravely challenge her father and strive for a better future.

Three Flames is a vivid story of one family’s yearning for freedom and of a young girl’s courage to face down tradition.

“Lyrical and poignant, Three Flames weaves the stories of three generations of a poor, Cambodian farming family as they struggle to survive and hold on to their humanity . . . Beautifully written and told with great compassion, Alan Lightman’s novel gives readers a family that is rich in stories, history, and heart, proving in the end that love shines even in the midst of great darkness.” —Loung Ung, author of First They Killed My Father

Alan Lightman is the author of six novels, including the international bestseller Einstein’s Dreams, as well as a memoir, three collections of essays, and several books on science. In 2003, Lightman founded the Harpswell Foundation, a nonprofit organization whose mission is to help advance a new generation of women leaders in Cambodia and Southeast Asia. He lives in the Boston area.

Chicago Review of Books, One of the Best Books of the Month

“Lightman (Einstein’s Dreams) portrays a Cambodian family’s conflicts with precision in this affecting novel told from the perspectives of six characters . . . Lightman infuses Cambodian culture naturally among his considered dissections of pain. Readers will be moved by this collection’s navigation of deeply personal heartaches and lingering implications of war.” —Publishers Weekly

“Set in Cambodia, Lightman’s first novel in almost a decade follows three generations of a rural farming family as they struggle to adjust to changing values and the steady encroachment of the modern world.” —The New York Times Book Review

“[An] intimate examination of a Cambodian family’s post–Khmer Rouge lives, driven by survival, redeemed by resilience . . . This undeniable testimony to the empowering effects of educating girls should resonate especially with aware teens.” —Booklist

“[Lightman's] time spent in Cambodia is apparent through the beautiful and unforced descriptions in Three Flames, his first work of fiction in six years . . . Lightman illustrates generational family trauma in a way that is succinct (at a slim 208 pages, Three Flames can be read in the better part of a day) yet leaves just the right amount of speculation to the reader. Three Flames is moving and beautifully written—an unforgettable embodiment of the resilience of the human spirit.” —Leslie Hinson, BookPage

“Weaving together six individual stories from one family, Alan Lightman examines freedom and obligation, heartache and forgiveness, and ultimately imparts a sense of hope with Three Flames . . . Sometimes charming and sometimes heartbreaking, Lightman’s novel is an accessible bridge into Cambodian culture for Western readers.” —Joan Gaylord, The Christian Science Monitor

“Pulling off a convincing story set in rural Cambodia is no mean feat, and in what seems a humble honoring of Khmer culture and traditions, the book pays notable attention to detail . . . The characters are flawed and complex: multidimensional and sensitive personalities. His nuanced writing of the female protagonists is particularly welcome as a departure from traditional literary clichés of voiceless Asian women relegated to secondary or invisible spaces . . . Three Flames is the story of an evolving Cambodia, as villages interact with modernity and a new generation dreams of choices and self–affirmation different than their parents’.” —Farah Abdessamad, Asian Review of Books

“[Lightman's] extensive travels in Cambodia and his reverence for the place shine through in this novel’s details—of planting the monsoon–season rice and later transplanting the tender shoots; of the strict hierarchies of age and status, as reflected by a complex system of honorifics; and of the tangible ways fate and difficult choices can pile up and doom another generation to poverty. That kind of reverence is essential when an author dares to conjure the dreams and terrors of characters from a world so different from his own, in a language that is not theirs. The author has approached that daunting task, it seems, with the awestruck curiosity of a stargazing poet, blending diligent study with a scientist–philosopher’s grasp of the vastness of what cannot be known. It’s the novelist’s job, after all, to imagine the unknowable universe of the human heart. In Three Flames, using prose as simple as in a fable, Lightman has ably channeled his characters’ private worlds, transcending the unfamiliarity of distant tongues and customs, and found the universal language of private shames and fondest desires, thwarted dreams and familial love.” —Kim Green, Chapter 16

“Three Flames is Alan Lightman’s best book since Einstein’s Dreams. It is a piercing story of social dissolution in damaged Cambodia. The traditional patriarchal control of women here combines with the lingering hurts of the Vietnam War and the intrusion of the entrepreneurial world in a caustic mix that burns generations of a rice–farming family. But a note of hopeful change delights the reader, and Lightman’s personal commitment to that change makes this an important story of global women’s rights. It is unusual for a writer to plunge so deeply into perceived social injustice in another culture, but the depth and detailed accuracy of Three Flames shows us humans working through big and serious changes in traditional beliefs and practices. Today we need such knowledge.” —Annie Proulx

“It is rare for a writer who is not native to a place to speak with a voice so real, honest, and true. Lightman does not miss a detail, with every gesture, every word uttered, every word refrained reminding me of my homeland. He burrows into the complexity of the Cambodian way of life, with its intricate maze of memories, dreams, and ghosts and reveals an aching for love and acceptance that is universal.” —Kalyanee Mam, award–winning filmmaker of A River Changes Course

“Lyrical and poignant, Three Flames weaves the stories of three generations of a poor, Cambodian farming family as they struggle to survive and hold on to their humanity. Each family member, like a flickering flame, lights the hopes and dreams of the others, offering courage in the face of shattering heartbreaks and tragedies. Beautifully written and told with great compassion, Alan Lightman's novel gives readers a family that is rich in stories, history, and heart, proving in the end that love shines even in the midst of great darkness.” —Loung Ung, author of First They Killed My Father

“Three Flames is a rich and poignant story of family, revenge, and redemption. Alan Lightman captures all the complexities of a rural Cambodian farming family living in a world hampered by customs and familial duties. Each carries the scars of their parents and ancestors, while courageously navigating through the tragedies and heartbreaks of modern life. With keen insight into the human heart, Lightman has written a deeply moving, multilayered story that resonates long after it’s over.” —Gail Tsukiyama, author of The Samurai's Garden

“Three Flames is a beautifully observed portrait of a Cambodian family by a writer with great insight and humility. Never melodramatic or sentimental, Lightman writes about a mother grappling with a desire for revenge, a daughter sold to pay a debt, and a younger sister determined to continue her education. And, in each case, he portrays individuals—not merely the products of history or poverty.” —Allegra Goodman, author of The Chalk Artist

“The gentle pressure that individuality exerts against tradition is the concern of Alan Lightman’s Three Flames. This set of deft vignettes gathers up the strands of a rural Cambodian family’s life and shows them pulling in concert and in opposition. As always, Lightman stints neither in sympathy nor honesty, and this deceptively slim volume is a salute to that most cunning of human capacities: endurance.” —Gregory Maguire, author of Wicked
Don't miss news & events from Counterpoint Press.
Subscribe to the newsletter today.