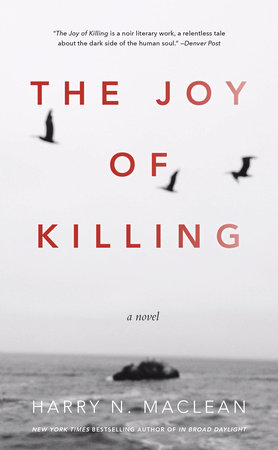 The Joy of Killing

In his classic works of true crime, Harry MacLean examined the dark side of America and its fascination with violence. In The Joy of Killing, he builds upon this expert knowledge to create a page–turning literary thriller — an exciting combination of love story, mystery, psychological suspense, and meditation on human nature and the origins of violence.

This fever dream begins on a stormy fall night at a lake house in the north woods of Minnesota, where we are introduced to a college professor who a few years earlier had written a novel in which he justified a gruesome campus murder under the nihilistic theory that there is no right or wrong, no moral center to man’s activity. The writer returns to the lake house where he had spent his childhood summers and locks himself in the attic, intent on writing the final story of his life. Playing on a continuous loop in his mind are key moments in his past: his childhood in small–town Iowa, where he and his best friend befriended a local drifter; his childhood on the lake where one summer a local boy drowned in a storm; and the central fixation of his erotic meeting with a girl on a train bound for Chicago when he was just fifteen. All of these threads weave together as the writer tries to piece together the multitude of secrets and acts of violence that make up one human life.

Reminiscent of the work of noir master Derek Raymond and John Banville’s The Sea with a touch of David Lynch, The Joy of Killing, with its haunting language and vivid images, is both a fascinating look into the fugue state of one man’s mind as well as a searing, philosophical look at violence and its impact on our human condition. With its elegant structure, multiple storylines, and edge–of–your–seat suspense, the novel is the tour–de–force fiction debut by one of America’s premier writers of true crime.

Harry MacLean is a lawyer and writer based in Denver, Colorado. He is the author of In Broad Daylight, which won an Edgar Award for Best True Crime and was a New York Times bestseller for twelve weeks; his second book, Once Upon A Time: A True Story of Memory, Murder, and the Law was named a New York Times Notable Book of the Year; and his third book, The Past Is Never Dead: The Trial of James Ford Seale and Mississippi's Search for Redemption was shortlisted for the William Saroyan Award, given by Stanford University.

Praise for The Joy of Killing

"Told in dark lyrical prose and revealing a master's command of the form, it's a rousing — though not an unqualified — success... I devoured it greedily, in part because MacLean writes gripping prose, in part because the book is masterfully constructed, and in part, yes, because of those lurid details."—Los Angeles Review of Books

"The Joy of Killing is a sophisticated philosophical thriller, its gothic vibes rooted in the murky soil of human behavior. Like a modern day Edgar Allen Poe, Harry MacLean knows how to manipulate the reader in all the best ways, right up to the novel's shocking ending." —Tod Goldberg, author of Gangsterland, Finalist for the 2014 Hammet Prize

"A man's desperate struggle to recapture his past propels this brilliant first novel from Edgar Award–winning true crime writer MacLean . . . MacLean skillfully takes readers along as the narrator spins and stumbles through a tangle of disturbing meditations on innocence and guilt."—Publisher's Weekly Starred Review

"[A] dreamlike novel...MacLean's writing is lyrical, ebbing and flowing like a deep riptide that conceals the danger beneath...A dizzying and delirious meditation on desire, violence, guilt, and philosophical justification...Yet it's almost impossible to resist the pull of the tide."—Kirkus

"Not since American Psycho has there been a novel as unnerving and relentless as Harry N. Maclean's compulsively readable The Joy of Killing. Inventive. Supremely twisted. And did I say unnerving?" —Gregg Olsen, New York Times best–selling author

"Harry MacLean has long been without peer at performing the alchemy required to turn the often banal facts of true crime into narratives as alluring as any fiction. In The Joy of Killing, he focuses his profound talents on a lyrical, relentless story that is at once literary and hardboiled. The Joy of Killing is an unblinking vision into a world where the currencies are elastic versions of eroticism, memory, tragedy, and violence, where a measure of vertigo is the norm, and where morality is a variable, never a constant. A complex, stunning novel." —Stephen White, New York Times best–selling author

"Harry MacLean's rich layering of reality and fantasy draws the reader into a vortex of turbulent images. The Joy of Killing is a brilliant look into a man's soul, a look that both fascinates and repels as it hurtles the reader toward an extraordinary ending. A major literary achievement." —Sandra Dallas, New York Times best–selling author

Praise for In Broad Daylight:

"First–class…Read and you may find yourself haunted." —Houston Chronicle

"The Edgar Award winner takes readers right where they want to go—inside the story." —Gregg Olsen, bestselling author of The Girl in the Woods

"An engrossing, credible examination of the way vigilante action can take over when the law appears to be powerless." —Publishers Weekly
Don't miss news & events from Counterpoint Press.
Subscribe to the newsletter today.