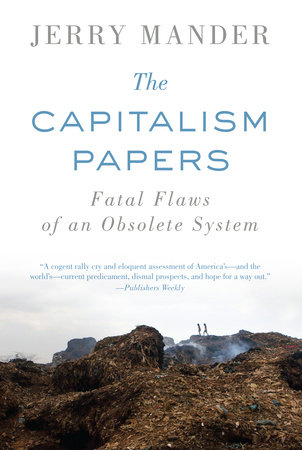 Fatal Flaws of an Obsolete System

In the vein of his bestseller, Four Arguments for the Elimination of Television, nationally recognized social critic Jerry Mander researches, discusses, and exposes the momentous and unsolvable environmental and social problem of capitalism.

Mander argues that capitalism is no longer a viable system: “What may have worked in 1900 is calamitous in 2010.” Capitalism, utterly dependent on never–ending economic growth, is an impossible absurdity on a finite planet with limited resources. Climate change, together with global food, water, and resource shortages, are only the start.

Mander draws attention to capitalism’s obsessive need to dominate and undermine democracy, as well as to diminish social and economic equity. Designed to operate free of “morality,” the system promotes “permanent war” as a key economic strategy. Worst of all, the problems of capitalism are intrinsic to the form. Many organizations are already anticipating the breakdown of the system and are working to define new hierarchies of democratic values that respect the carrying capacities of the planet.

Called the the patriarch of the anti–Globalization movement by The New York Times, Jerry Mander was Founder and is a Distinguished Fellow of the International Forum on Globalization. He also spent 15 years in the advertising business as president of Freeman, Mander & Gossage, including producing the famous Sierra Club campaigns of the 1960s that saved the Grand Canyon. He has BS and MS degrees in international economics, and he lives in Northern California.

Praise for The Capitalism Papers

"In Mander's provocative newest, the environmentalist, social critic, and author of 1977's Four Arguments for the Elimination of Television predicts the impending failure of the capitalist "experiment," one based on infinite expansion and unable to meet the challenges of climate change, peak oil, finite resources, and a rising global population. Mander lambasts the "intrinsic amorality" of capitalism, arguing that its focus on amassing wealth at any cost has abetted the rise of the incredibly lucrative military–industrial complex, and the practice of "so–called democratic governments…catering to and facilitating the interests of the ultra–rich." Arguing that "cooperation must replace competition," Mander's concerns transcend party lines and established ideologies. As such, he closes with a compelling discussion of four ideas that he believes might blaze a trail away from capitalism and toward sustainable economic models: he suggests a refocusing on the limits of our planet, an emphasis on localization (as opposed to globalization), improved corporate structures, and a dismissal of the current black–and–white notion of capitalism vs. socialism. Refreshing and informative, these papers are a cogent rally cry and eloquent assessment of America's––and the world's––current predicament, dismal prospects, and hope for a way out." —Publishers Weekly

"This is a bold, much–needed book. On a subject where others are too often abstract or strident, Jerry Mander writes with a down–to–earth common–sense wisdom. I particularly like the way he weaves together his own experience in business and advertising with a large–spirited awareness of so many dimensions of the fragile planet we live on." —Adam Hochschild, author of King Leopold's Ghost

"Jerry Mander's The Capitalism Papers is a book of astonishing clarity and all–too–rare honesty. In an age where our major institutions are in collapse as our environment crumbles, and in which there is no apparent relief on the horizon, Mander has the courage to say that the emperor has no clothes; that the profit–obsessed economic system we are expected to swear loyalty to has its best days in its rear–view mirror. The implications are revolutionary." —Robert McChesney, author of Rich Media, Poor Democracy—Communication Politics in Dubious Times

"Capitalism's days are numbered but few have the courage to say so. Jerry Mander has both the courage and insight to put the case before us, and he does it brilliantly and movingly. There is hope for this planet and our future, Mander argues, but only if we are honest enough to admit that the experiment in unregulated market capitalism has failed and it is time to move beyond it." —Maude Barlow, author of Blue Covenant: The Global Water Crisis and the Coming Battle for the Right to Water

"Written in accessible language, and packed with real–life example. Point by point, Mander explains why capitalism can no longer serve people or the planet. And he leads us to a set of principles on which we can build a new economy for the 21st century and beyond." —Anne Leonard, author Story of Stuff

"This is a big book in terms of ideas, scope, and depth. I hope it finds the wide audience it deserves." —James Gustave Speth, founder, World Resources Institute (WRI)
Don't miss news & events from Counterpoint Press.
Subscribe to the newsletter today.