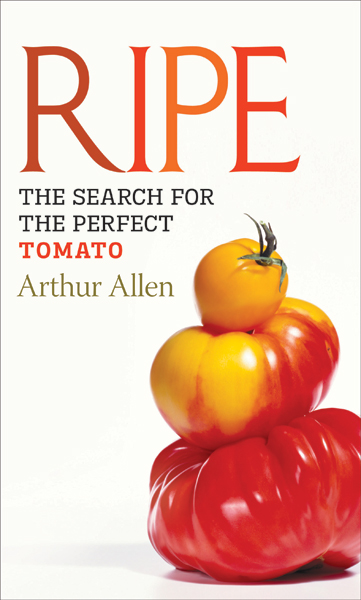 The Search for the Perfect Tomato

The tomato. As savory as any vegetable, as sweet as its fellow fruits, the seeded succulent inspires a cult–like devotion from food lovers on all continents. The people of Ohio love the tomato so much they made tomato juice the official state beverage. An annual food festival in Spain draws thousands of participants in a 100–ton tomato fight. The inimitable, versatile tomato has conquered the cuisines of Spain and Italy, and in America, it is our most popular garden vegetable. Journalist Arthur Allen understands the spell of the tomato and is your guide in telling its dramatic story. He begins by describing in mouthwatering detail the wonder of a truly delicious tomato, then introduces the man who prospected for wild tomato genes in South America and made them available to tomato breeders. He tells the baleful story of enslaved Mexican Indians in the Florida tomato fields, the conquest of the canning tomato by the Chinese Army, and the struggle of Italian tomato producers to maintain a way of life. Allen combines reportage, archival research, and innumerable anecdotes in a lively narrative that, through the lens of today’s global market, tells a story that will resonate from greenhouse to dinner table.

Arthur Allen, a former Associated Press foreign correspondent, has written for The New York Times Magazine, The New Republic, The Washington Post, The Atlantic, Slate, Smithsonian, and Salon. He lives in Washington, D.C.

"It's that time of year—our hopes for the garden expressed in our nostalgia for the perfect tomato. In the end, Arthur Allen breaks it to us gently, there's no such thing. It exists somewhere in our collective American imagination—just as the French dream of the perfect bread and the Italians dream of olive oil as it was when they were children. 'If we reach our destination,' Allen quotes one of his sources, 'we'll have nothing to do and nowhere to go. We never really want to get there!' Allen takes us on a romp through every variety; every texture and flavor, every existing genetic combination. In the end, he has a better understanding of the great difference between gardening and agriculture. It's one thing to dream of a flavor, another to re–create it for the masses." —Los Angeles Times

"A robust tale of how tomatoes get to the table and why some don't taste very good when they get there. For the denizens of the northern portions of the East Coast outside the growing season, writes former AP foreign correspondent Allen, tomatoes mean the round red things grown in Florida. More precisely: "Roughly 85 percent of the areas east of the Mississippi were served by Florida tomatoes in the October–June months, with about the same percentage in the West buying Mexican products." Lucky Westerners: Tomatoes from Mexico still taste something like tomatoes, and a small army of plant scientists and agronomists from all over the world have descended on the country to keep the supply coming. Poor Easterners: Tomatoes grown there are "flawed" save for one thing—they fit a fast–food hamburger bun perfectly, and even if they have no taste, they are big and firm and can be sliced quickly by a machine without being turned to pulp. Implicated in that fast–food maw are issues of food justice, about which Allen writes from an unusual firsthand perspective. He ventured into the fields and picked tomatoes with immigrant workers, coming in with about half their yield owing to his inexperience but netting the same amount of pay, with a champion picker earning about $70 for a load of tomatoes that would likely bring $360 in a grocery store. Not a bad profit for an industry supported by such corporate types as "a mild–mannered flak who produced reassuring explanations for why a socially responsible company like Burger King couldn't pay a bit more for its tomatoes." Ultimately, Allen suggests, the factory system will endure alongside the boutique, heirloom, organic–garden variety of tomato production, with perfection not likely coming from the former.
An eye–opener for foodies, consumers and social–justice activists alike." —Kirkus

"This compelling narrative of the vaccine's undoubted triumphs and troubling challenges is highly recommended." —Library Journal

"Allen deftly maneuvers as he wrangles myriad aspects of a very complicated issue into a comprehensible text." —Booklist

"Allen adroitly chronicles . . . describing the science and serendipity behind each breakthrough and breathing life into the researchers who achieved them." —The Wall Street Journal
Don't miss news & events from Counterpoint Press.
Subscribe to the newsletter today.