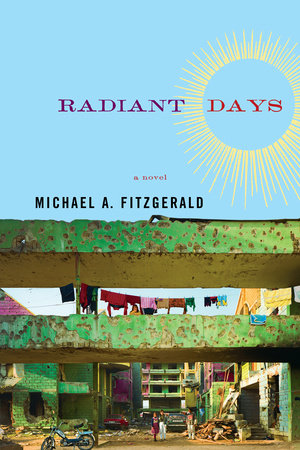 During the last days of the Balkan War in the summer of 1995, Anthony, a hapless American questioning the dot–com values that allow him to live a pampered existence in San Francisco, agrees to join Gisela, a beauty he barely knows, in a search for her son, lost in a Hungarian orphanage. In Budapest they meet Marsh, a brilliant but frustrated British war correspondent. Anthony thinks he has found in Eastern Europe what his former life was missing: enterprising young people openly questioning U.S. values, determined to remake their own world. But when an odd and edgy love triangle emerges and he discovers his mission with Gisela is much darker than he imagined, Anthony is thrown further in flux. Moving from the tattered romanticism of Budapest, through the sparkling Dalmatian coast, and into the brutalized landscape of inland Croatia, the novel takes a shocking turn of irreversible consequence.

Radiant Days is held taut in the voice of Anthony, whose desire to experience a more serious (and thrilling) life leaves injury in its wake. With a swift plot and seamless style, Michael FitzGerald delivers a story of unattainable love, misplaced lust, and the politics of compassion.