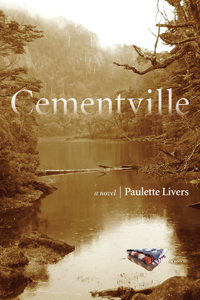 Cementville has a breathtaking set up: 1969. A small Kentucky town, known only for its excellent bourbon and passable cement, direct from the factory that gives the town its name. The favored local sons of Cementville’s most prominent families all joined the National Guard hoping to avoid the draft and the killing fields of Vietnam. They were sent to combat anyway, and seven boys were killed in a single, horrific ambush.

The novel opens as the coffins are making their way home, along with one remaining survivor, the now–maimed town quarterback recently rescued from a Vietnamese prison camp. Yet the return of the bodies sets off something inside of the town itself —a sense of violence, a political reality, a gnawing unease with the future — and soon, new bodies start turning up around town, pushing the families of Cementville into further alienation and grief.

Presented as the Our Town of its time, we’ll meet Maureen, the young sister of a recently returned solider who attempts to document the strange changes going on in her town; Harlan O’Brien, a war hero just rescued from three years in a POW camp whose PTSD starts bending his mind in terrifying ways; Evelyn Slidell, the wealthy icon and oldest woman in town, a descendent of the its founders and no stranger to what grief does to a family; Giang Smith, the ‘war bride’ who flees the violence of Vietnam with her new American husband only to encounter echoes of it in her new home; and the notorious Ferguson clan, led by the violent Levon and his draft–dodging younger brother Byard, who carry a secret that could further tear the town apart.

With the Civil Rights Act only a few years old, a restless citizenry divided over the war, and the Women’s Movement sending tremors through established assumptions about family life, Cementville provides a microcosm of a society shedding the old order and learning how to live with grief — a situation with resonant echoes concerning war and community still being confronted today.

Paulette Livers is a Kentucky transplant to Chicago via Atlanta and Boulder, where she recently completed the MFA at the University of Colorado. Her work has appeared in The Southwest Review, The Dos Passos Review, Spring Gun Press, and elsewhere, and can be heard at the audio–journal Bound Off. Livers was awarded the 2012 Meyerson Prize for Fiction (for material from Cementville), and received Honorable Mention for the Red Hen Press Short Story Award (also for material from Cementville). This is her first novel.

"With nods to not only Dickens but Nathaniel Hawthorne and Shirley Jackson too, Livers asserts the novel's far–reaching intentions via her deployment of ornate, high–powered language. The thought–provoking debut wears its literary aspirations like a velvet funeral gown, calling attention to the grim legacies of combat and the changing realities of small–town U.S.A. As another bloody American entanglement staggers to a close, Cementville makes it clear that the consequences of warfare reverberate much further than on battlefields, for civilians as well as soldiers." —Atlanta Journal Constitution

"1969 is often remembered as the summer of love, of Abbey Road and the flight to the moon. This book is about the realities of that time and by extension the realities we still live with. Unflinching and clear, and beautifully written, Cementville manages to be what good books always are: a window into the true world, exhilarating and inspiring even as it faces into the dark." —Richard Bausch

"Cementville gave me everything I want in a novel. The place and time period come alive on the page, the characters are as real as all the people I know best, and I'm still thinking about them and their stories even though I finished the book several days ago. This is just simply a beautiful novel, and it could only be written by someone with a very large heart. I'll be recommending it to everyone. Paulette Livers has made me feel that special thrill that I've never gotten from anything but great fiction." —Steve Yarbrough, The Realm of Last Chances

"Paulette Livers is the real thing –a blazing talent with a fierce intelligence and a big heart, big enough to encompass a horrible tragedy and the inner life of an entire community. She has written a brilliant and deeply compassionate study of grief, violence, loneliness, and love. And her language sings. This is a stunning debut —a perfect novel with deep implications for our own time." —Lee Smith, Guests on Earth

"Cementville is a tremendous debut novel. How Paulette Livers is able to maintain her light touch while taking on the era of the Vietnam War —with its seismic worldwide effects— is nothing short of genius. With its beautiful, wounded characters, its startling insights into their private hearts, and frequent flashes of humor, this book is one of the best novels I've read in a long while." —Christine Sneed, Little Known Facts

"Paulette Livers paints a compelling portrait of a small Kentucky town, with its tragedies, pleasures, and crimes, with its fallen heroes, its agoraphobics, and its young lovers. Her prose crackles as it traces the uneasy lives of the folks of Cementville." —Bonnie Jo Campbell, bestselling author of Once Upon a River

"What is central and valuable is the depiction of a specific and near–forgotten way of life. Through her strongly drawn characters, Livers depicts a community drawing on its traditional strengths—kindness, respect, and practicality—to support each other through the very new challenges presented by war, trauma, and suspicion. This novel will be enjoyed by fans of Marilynne Robinson and of lyrical novels that depict the awesome inner struggles and resources of seemingly everyday people." —Booklist

"Long, lyrical chapters explore the wounds wrought on those left bereft…Livers uses each chapter to explore a different facet of war and its aftermath." —Publishers Weekly

"The arrival of dead soldiers from Vietnam in 1969 upturns and rewires the lives in a small Kentucky town. An earnest and sober portrait of the homefront." —Kirkus

"[a] gently paced evocation of a nearly forgotten time and place." —Elle

"..Cementville could be any American town in 1969. The novel is a moving representation of the nation's psychological state in that time of turmoil." ——Real Simple
Don't miss news & events from Counterpoint Press.
Subscribe to the newsletter today.