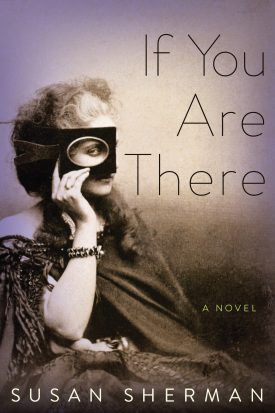 Soon, all of Paris is alit with the news of an impending visit from Eusapia Palladino, the world’s most famous medium. It is through her now famous employers that Lucia attends Eusapia’s gatherings and eventually falls under the medium’s spell, leaving the Curie household to travel with her to Italy. Ultimately, Lucia is placed directly in the crosshairs of faith versus science –what is more real, the glowing substances of the Curie laboratory or the glowing visions that surround the medium during her séance?

Praise
Praise for If You Are There

"The bold, incandescent descriptions of séances are where Sherman’s art truly shines." —Booklist

"Readers interested in the Curies, in the tense interplay of faith, showmanship, and science, and the vibrant expatriate world of 20th–century Europe will enjoy this latest offering by Susan Sherman..."—History Novel Society

"Sherman's tale is a feast of detail and description, from the dangerous drudgery of the Curies' work creating radioactive matter to the trickery behind the table–turning and ectoplasmic effects at the séances."—Kirkus

"Lush with the landmarks of turn of the century Paris, when the age of reason came head to head with a resurgent fascination with the occult, Susan Sherman's beautiful novel If You Are There provides one pleasure after another, and I couldn't put it down." —Elizabeth McKenzie, author of The Portable Veblen, Longlisted for the National Book Award and Finalist for the Baileys Prize for Women's Fiction

"If You Are There is challenging and yet unpretentious, complex, deliberate, and wholly, completely original. With a street–wise eye for detail and an ear well–tuned to lyricism, Susan Sherman writes with a fundamental empathy for life as it is lived. Her relentless, meticulous prose is unmatched." —Jill Alexander Essbaum, New York Times bestselling author of Hausfrau

"Susan Sherman has created a sympathetic protagonist whose belief in cosmic signs, scientific discovery, and the interconnectedness of humankind is nothing short of magical." —Vanessa Diffenbaugh, New York Times bestselling author of The Language of Flowers

"The fictional and historical mingle in Sherman's marvelous account of the lives of Marie and Pierre Curie. It is a rare book that is as scientific as it is magical and as magical as it is scientific. This is that book." —Karen Joy Fowler, author of We Are All Completely Beside Ourselves, Winner of the PEN/Faulkner Award

"This splendid novel is about discovery, in its many forms: in science, in love, in ambition, in connection; it celebrates the intersection of the natural world and faith. Sherman explores all of her characters with precise, tender compassion and radiant insight; we move with them through beautifully described turn–of–the–century Europe, as they find their own understanding of love and loss and strength. You will love this unforgettable book." —Karen E. Bender, author of Refund, Finalist for the National Book Award
together with the hysterical ignorance of the larger society that vents all its terror on them, slaughter together with a sustaining ritual life. Great scenes abound – a deadly stampede to board a train; flights through snow and icy rivers toward some illusion of safety; tender moments of faith and hope." —The Historical Novels Review

"Berta Lorkis is materialistic, self–centered, and egotistical…she makes for a fascinating main character in Susan Sherman's The Little Russian. Covering more than twenty years, [the novel] focuses on the changes and difficulties Russian Jews faced in the early years of the 20th century…Sherman does a wonderful job showing Berta's many layered personality. This is a good choice for book clubs since readers' feelings about Berta should generate a good discussion." —The Reporter