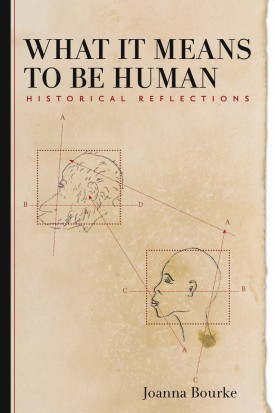 What It Means to be Human

Historical Reflections from the 1800s to the Present

In 1872, a woman known only as “An Earnest Englishwoman” published a letter titled “Are Women Animals?” in which she protested against the fact that women were not treated as fully human. In fact, their status was worse than that of animals: regulations prohibiting cruelty against dogs, horses, and cattle were significantly more punitive than laws against cruelty to women. The Earnest Englishwoman’s heartfelt cry was for women to “become–animal” in order to gain the status that they were denied on the grounds that they were not part of “mankind.”

In this fascinating account, Joanna Bourke addresses the profound question of what it means to be “human” rather than “animal.” How are people excluded from political personhood? How does one become entitled to rights? The distinction between the two concepts is a blurred line, permanently under construction. If the Earnest Englishwoman had been capable of looking 100 years into the future, she might have wondered about the human status of chimeras, or the ethics of stem cell research. Political disclosures and scientific advances have been re–locating the human–animal border at an alarming speed. In this meticulously researched, illuminating book, Bourke explores the legacy of more than two centuries, and looks forward into what the future might hold for humans, women, and animals.

Praise
Praise for What It Means to Be Human

"Avoiding the impenetrable prose often found in academic books, this deeply scholarly work is lively and challenging in equal measure, and rewarding throughout." —Boston Globe