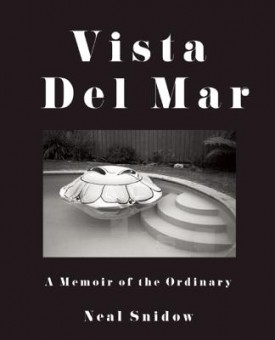 A Memoir of the Ordinary

This remarkable book joins the company of “self–work,” deep acts of memory that serve to illuminate the present by shining the clear light of careful regard on the past. The book finds company in the work of D J Waldie’s Holy Land, Didion’s Slouching Towards Bethlehem, and the profound My Struggle by Karl Ove Knausgaard.

In 1996 Neal Snidow found himself at a personal impasse as he and his wife struggled in vain to have a child. Locked in sadness at their predicament, in mid–career as a college teacher and unpublished writer, and at the first daunting steps of open adoption, as a kind of solace Neal began taking black and white photos of his old neighborhood in southern California. The film was slow, the camera on a tripod, the process awkward, and the goal no more than Garry Winogrand’s famous dictum that he made pictures “to find out what something will look like photographed.”

But as this process unfolded and the images began to accumulate, slowly but surely the pictures unlocked the past, and he began to delve into family history, opening out the secret and the unspoken and evoking the lost pleasures and losses of the beach town where he had grown up. The chapters that followed, like the photos that now accompanied them, were quietly observant of an ordinary surface around which gathered an aura of struggle, gaiety and loss. He titled the book Vista Del Mar, for the street that ran past his old apartment to the edge of the Pacific, and gave it the subtitle a memoir of the ordinary in testimony to the everydayness of the experiences he explored. The chapters move back and forth in time and place, to Virginia, to a homestead in Wyoming, to depression–era Nebraska, to the Second World War. Aunts, uncles, ancestors, beach denizens, characters of film noir, and finally a miraculous new baby, all populate the pages which despite the struggles they relate conclude on a major chord of reconciliation and hope.

Neal Snidow has been a public school teacher and private writer for many years. He grew up in Virginia, Nebraska, and southern California and graduated from high school in Redondo Beach in 1966. He earned a BA in English at the University of California at Riverside, and an MA at the University of Virginia, where he was a Danforth Fellow. He currently teaches, writes and photographs in Magalia, California. Vista Del Mar is his first published book.

Praise
"Through a wide–angled lens of laser–crisp language, Neal Snidow's brilliant Vista del Mar directs our gaze to the sea of time. Like a ghostly image coming to life in developing fluid, his tightly focused and artfully framed narrative seizes the moment—a moment in which waves of past and future are subtly engrained. From Hollywood noir to white–hot LA beaches, his story is metered to the black and illuminated with refined sensitivity to shades of light. Singularly his and entirely ours, it is the story of America, moving west, landing at the edge of the sea, and asking, "Now what?" Required reading." —Thomas Christensen