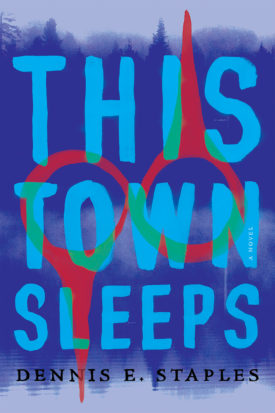 “Elegant and gritty, angry and funny. Staples’s work is emotional without being sentimental. Dennis unmakes something in us, then remakes it, a quilt of characters that embody this town, this place, which sleeps but doesn’t dream, or it is all a dream we want to wake up from with its characters.” –Tommy Orange, author of There, There

On an Ojibwe reservation called Languille Lake, within the small town of Geshig at the hub of the rez, two men enter into a secret romance. Marion Lafournier, a midtwenties gay Ojibwe man, begins a relationship with his former classmate Shannon, a heavily closeted white man. While Marion is far more open about his sexuality, neither is immune to the realities of the lives of gay men in small towns and closed societies.

Then one night, while roaming the dark streets of Geshig, Marion unknowingly brings to life the spirit of a dog from beneath the elementary school playground. The mysterious revenant leads him to the grave of Kayden Kelliher, an Ojibwe basketball star who was murdered at the age of seventeen and whose presence still lingers in the memories of the townsfolk. While investigating the fallen hero’s death, Marion discovers family connections and an old Ojibwe legend that may be the secret to unraveling the mystery he has found himself in.

Set on a reservation in far northern Minnesota, This Town Sleeps explores the many ways history, culture, landscape, and lineage shape our lives, our understanding of the world we inhabit, and the stories we tell ourselves to make sense of it all.

DENNIS E. STAPLES is an Ojibwe writer from Bemidji, Minnesota. He graduated from the Institute of American Indian Arts with an MFA in fiction. He is a graduate of the 2018 Clarion West Writers Workshop and a recipient of the Octavia E. Butler Memorial Scholarship. His work has appeared in Asimov's Science Fiction and Nightmare magazine. He is an enrolled member of the Red Lake Nation.

"In this novel we travel to familiar literary terrain: a community--in this case, an Indigenous reservation in northern Minnesota--that is still suffering from the ravages of colonialism and its aftermath. Yet Staples approaches this grand injustice with a fresh intimacy, informing us of the ways it continues to singe people's lives, and how the search for truth--in one's identity, hopes, love--defines them." --The New York Times Book Review

"Elegant and gritty, angry and funny. Staples's work is emotional without being sentimental. Dennis unmakes something in us, then remakes it, a quilt of characters that embody this town, this place, which sleeps but doesn't dream, or it is all a dream we want to wake up from with its characters. We move through the dream that is this novel, unable to move or not move, arrested by the striking sentences and sentiments of a voice we can't sleep to, one which wakes in us the ability to understand so much about ourselves and the way history and time weigh on us in ways it's both understandable to stay asleep or to have to wake up from." --Tommy Orange, author of There, There

"By turns cynical and plain-spoken, Staples is a guide with inside knowledge about the lives he depicts . . . A clear-eyed and distinctive debut." --Star-Tribune (Minneapolis)

"Elegantly gritty and at times comical . . . One part self-meditation and one part town history, This Town Sleeps is a riveting tale of lineage." --TinaMarie Craven, The Ridgefield Press

"Staples stakes out a place of his own . . . Staples' talent lies in his ability to capture all sides of a phenomenon--the desperation to leave home and the pull to return; the safety of the closet and the freedom of living outside of it; the traditions that keep culture alive and their loss." --Eric Newman, Bookforum

"Staples' empathy for the entire town makes the characters clear and urgent . . . There's a beauty to the unadorned prose . . . poignant . . . This Town Sleeps is suffused with such humanity and the voices are so enchanting . . . The narrative is so well controlled that, however brief, This Town Sleeps remains a consistent pleasure." --Matthew Caprioli, Lambda Literary

"I love a genre-bending book, especially if it pulls the best from multiple genres. This Town Sleeps is set on an Ojibwe reservation in Minnesota, and deals with death, memory, and all the different ways humans can keep secrets." --Christina Orlando, Tor.com

"Staples' first novel is an arresting look at the intersection of past and present. Himself an Ojibwe, Staples writes with authority about his characters and setting . . . An auspicious debut with a memorable protagonist." --Booklist

"In a debut that intertwines the spiritual and the cynical . . . Dennis E. Staples demonstrates a green but thrilling emerging talent . . . Staples's tale of love, loss, anger, memory and identity is rendered in such keen prose that the setting seems sharp and alive--not, in fact, asleep . . . This is an imaginative, ambitious novel, a resounding argument that Staples is a writer to watch." --Shelf Awareness

"This Town Sleeps is an utterly strange and compelling book. Magic and murder and a remote Indian reservation, written with deep feeling and dark humor. Staples is pushing the genre of Native American fiction into new areas. Read this book!" --David Treuer, author of The Heartbeat of Wounded Knee