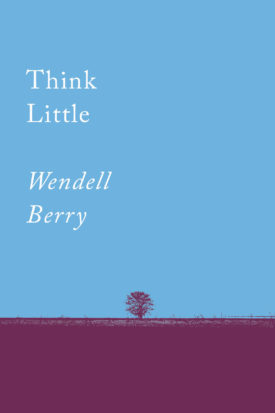 First published in 1972, “Think Little” is cultural critic and agrarian Wendell Berry at his best: prescient about the dire environmental consequences of our mentality of greed and exploitation, yet hopeful that we will recognize war and oppression and pollution not as separate issues, but aspects of the same. “Think Little” is presented here alongside one of Berry’s most popular and personal essays, “A Native Hill.” This gentle essay of recollection is told alongside a poetic lesson in geography, as Berry explains at length and in detail, that what he stands for is what he stands on.Each palm–size book in the Counterpoints series is meant to stay with you, whether safely in your pocket or long after you turn the last page. From short stories to essays to poems, these little books celebrate our most–beloved writers, whose work encapsulates the spirit of Counterpoint Press: cutting–edge, wide–ranging, and independent.

Glitter Guide, 1 of the 10 Books We're Most Excited About Reading This Year
Glitter Guide, Book On Climate Change To Read This Earth Day


"This book speaks a lot about how we think on a macro level, but it is also about the importance of focusing on what we can do on a smaller scale—things like planting a garden and growing your own food . . . Connecting with the earth is very important to me.” —Nicole Richie, Vogue

“Wendell Berry is Kentucky's gift to the literary world.” —The Courier–Journal (Louisville), 1 of Louisville's 10 Best Reads for the Bookworm in Your Life