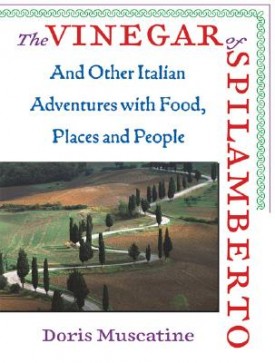 And Other Italian Adventures with Food, Places and People

In 1958, Doris Muscatine’s husband, a medieval scholar, got a Fulbright for a year of research in Italy. They lived in Rome and almost immediately became hopeless Italophiles. The Vinegar of Spilamberto is the enchanting story of their experiences. The couple returned often, staying in various apartments—a house in Venice, a medieval tower in Tuscany, and a villa on the Appia Antica with its own catacombs.

From such small places as Populonia and Rovescala to bigger ones like Riace and Dozza, the family immersed themselves in the Italy off the typical tourist tracks. Muscatine describes the extreme cultural differences everywhere, but most notable in Sicily, and delights in various foods—including Il Ranocchio, dall’antipasto al dolce (The Frog, from antipasto to dessert)—and the wines that went with them. Chapters are devoted to the Italian appreciation of slow food and of special products such as truffles and balsamic vinegar.

Doris Muscatine wrote extensively on food, wine, and cultural history for such publications as Bon Appetit and House and Garden, and authored A Cook's Tour of San Francisco, A Cook's Tour of Rome, Old San Francisco: The Biography of a City, and Monday Night at Narsai's. She was recognized for achievement in Literature-Journalism by the American Institute for Wine and Food and received an Award of Merit from the City and County of San Francisco. She died in 2006.