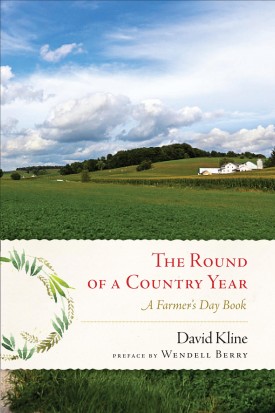 Round of a Country Year

David Kline has been called a “twentieth–century Henry David Thoreau” by his friends and contemporaries; an apt comparison given the quiet exuberance with which he records the quotidian goings–on on his organic family farm. Under David’s attentive gaze and in his clear, insightful prose the reader is enveloped in the rhythms of farm life; not only the planting and harvesting of crops throughout the year, but the migration patterns of birds, the health and virility of honeybees left nearly to their own devices, the songs and silences of frogs and toads, the disappearance and resurgence of praying mantises in fields–turned woodlands, the search for monarch butterflies in the milkweed. There’s rhythm in community, too—neighbors gathering to plant potatoes or to maintain an elderly friend’s tomato garden, organic farming conferences and meetings around family dining tables or university panels.

Interspersed with local lore (when the spring’s first bumblebee appears the children can go barefoot) is deep technical knowledge of cultivation and land management and the hazards of modern agri–business. Kline records statewide meetings of district supervisors, knows which speakers and committee chairmen are in the pockets of the oil and gas lobbyists, stands up and says his part.

At a time when America’s population is being turned toward the benefits of small, local farming practices on our health and our environment, Kline’s daybook offers a striking example of the ways in which we are connected to our environment, and the pleasure we can take in daily work and stewardship.

With horses and the help of his family and friends, David Kline farms 120 acres in Ohio. He is the author of Great Possessions: An Amish Farmer's Journal, Scratching the Woodchuck: Nature on an Amish Farm, and Letters from Larksong: An Amish Naturalist Explores His Organic Farm.

"This book is a quiet paean to things lost, a set of values we've put in the attic."
—New York Times Book Review

"This journal of an Amish farmer – an observant, well–read naturalist – disarms before it begins. The acknowledgements start off, I am deeply grateful to my entire family for their . . . generous offers to do the evening milking without my help so that I would have an hour of uninterrupted time to meet an editor's deadline. David Kline and his family work their 70 tillable acres (of a 120–acre farm) with horses and without electricity or chemicals; but they can almost always take the time to listen to the season's bird songs . . . or list a new bird species spotted on the farm . . . or stop the team while mowing to rescue a nest of bobolinks. In these short essays, first published in the Amish magazine Farm Life and here introduced by Wendell Berry, Kline expresses his delight in nature (including probably the most beautiful of all batrachian sounds, the pure sustained trill of the American toad); speculates on connections between modern agricultural practices and the decline of wildlife populations; quotes other naturalists and scholars from Aristotle to Jean Henri Fabre to the latest academic researchers; instructs on the proper preparation of sassafras tea; and lets us in on countless small discoveries and observations. In thus sharing his Great Possessions, he comes across as a model of sanity, contentment, and generosity. And his inherited tradition of simple living, as supported here by wide ecological learning, is strikingly persuasive." —Kirkus Reviews

"He is an Amish Thoreau."—Wes Jackson, author of Consulting the Genius of the Place: An Ecological Approach to a New Agriculture

Praise for Scratching the Woodchuck

"Unlike the plethora of books intended to help renew and reassemble our disjointed, modern lives, Scratching the Woodchuck provides no instructions for being mindful, strengthening community, cherishing the natural world, deepening spirituality, or doing meaningful work. Instead, Amish farmer David Kline shares with readers a life wholly made of these fundamental things." —San Francisco Chronicle

"Kline's thoroughly charming survey of the natural world . . . has much to teach us about appreciating wild things wherever we happen to be." —Kirkus Reviews

"A calm and peaceful book . . . David Kline is a wonderful voice for all of these observations."—Booklist

"In this delightful book Kline instructs the reader about the nature and wildlife that he observes on his Ohio farm. But his underlying message is, not surprisingly, to take the time to appreciate the joys of life: the birds, trees, hayfields, streams, clouds, spring peepers?all of nature, including our fellow human beings . . . As a pleasant, instructive visit with an appreciative witness to nature, this book is recommended for all libraries." —Library Journal

"If you want to know what the real world looks like, you had best read Scratching the Woodchuck. David Kline writes with joy, good humor, and style. I can't think of a book that's given me more pleasure in years." —Bill McKibben

"Scratching the Woodchuck is a wonderful book about the pleasures derived from a well loved and competently used place. David Kline and the Amish are national treasures." —David Orr

"David Kline is an alert observer of the natural world and its creatures, and an utterly pleasant and interesting companion." — Wendell Berry

"David Kline's vision goes beyond 20/20 into the realm of A/Z, where he eloquently uses all of the letters in between to delight us with his insights from his wide travels at home. He's an Amish Thoreau, except he scratches the woodchuck that Thoreau ate." —Wes Jackson