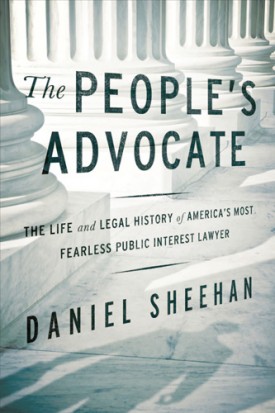 The People’s Advocate is the autobiography of American Constitutional Trial Attorney Daniel Sheehan. Sheehan traces his personal journey from his working-class roots through Harvard Law School and his initial career in private practice. His early disenchantment led to his return for further study at Harvard Divinity School, and rethinking the nature of his career. Eventually his role as President and Chief Trial Counselor for the famous Washington, D.C.-based Christic Institute would help define his role as America’s preeminent cause lawyer.

In The People’s Advocate, Sheehan details “the inside story” of over a dozen historically significant American legal cases of the 20th Century, all of which he litigated. The remarkable cases covered in the book include both The Pentagon Papers Case in 1971 and The Watergate Burglary Case in 1973. In addition, Sheehan served as the Chief Attorney on The Karen Silkwood Case in 1976, which additionally revealed the C.I.A.’s Israeli Desk had been smuggling 98% bomb-grade plutonium to the State of Israel and to Iran. In 1984, he was the Chief Trial Counsel on The American Sanctuary Movement Case, establishing the right of American church workers to provide assistance to Central American political refugees fleeing Guatemalan and Salvadorian “death squads.” His involvement with the sanctuary movement ultimately led to Sheehan’s famous Iran/Contra Federal Civil Racketeering Case against the Reagan/Bush Administration, which he investigated, initiated, filed, and then litigated. The resulting “Iran/Contra Scandal” nearly brought down that Administration, leading Congress to consider the impeachment over a dozen of the top-ranking officials of the Reagan/Bush Administration. The People’s Advocate is the “real story” of these and many other historic American cases, told from the unique point of view of a central lawyer.
About Daniel Sheehan

Daniel Sheehan's 40-year legal career is distinguished by his aggressive and successful work as a federal civil rights attorney. He graduated from Harvard Law School, where he founded the Harvard Civil Rights Law Review and later returned to obtain his PhD from the Harvard Divinity School. He was the Executive Director of the Christic Institute, as well as the Executive Director of Mikhail Gorbachev's STATE OF THE WORLD FORUM. He is still active and currently lives in Santa Cruz, CA.

'"Fearless' is a word that not too many people can appreciate until they are faced with a situation that calls for an actual fearless act. And Daniel Sheehan, with the resources of government history's most fearless lawyers. He was fearless from the beginning, when he first learned what the word "political" really meant. At age seventeen, he clashed with Senator Jacob Javitz over an appointment to the United States Air Force Academy. Instead, it went to the son of a major campaign contributor. This teenager would grow up to become a lawyer on some of the most-politically hot cases in a generation: The Pentagon Papers, Watergate, Iran/Contra, among many others. His memories are both fascinating and horrifying. Fascinating because Sheehan places you directly inside the halls of power, and horrifying for the same reason. "Look, Danny," one House investigator tells Sheehan, "if anyone is so ignorant that he doesn't know that the Central Intelligence Agency has been smuggling heroin from Southeast Asia through Cuba into the United States for decades to secretly finance first the Nationalist Chinese and later their covert operations in Southeast Asia, then that person is too ignorant to function effectively in Washington, D.C." At the same time, Sheehan is told, "Don't make the foolish mistake of trying to tell the American people about the secret history of the United States." Sheehan resolved to do "everything I could to change that operating principle in Washington." Beginning with The Pentagon Papers--a case that echoes into today's news over the people's right to know what the government is doing--Sheehan has fulfilled that promise to himself. This memoir takes us directly inside Sheehan's fearless mind." - Foresight