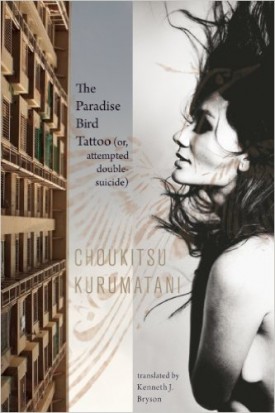 Ikushima lives as a drone, slaving away for an advertising company that neither values him nor cares about his existence. He flees the city to become a vagabond, catching local trains to anywhere, eventually finding a miserable job skewering refuse animal organs for a local restaurant in Amagasaki, a town riddled with gangs and miscreants. He settles into a routine in the city, and through his brief and accidental encounters with his deeply troubled neighbors–the evil-worshipping tattoo artist, his former-prostitute-cum-Madame employer, an unclaimed child, and the fleetingly striking Ayako–he bridges the gaps in his social world and inadvertently begins to live. With this newfound, yet unacknowledged, passion for life, Ikushima embarks on a love affair with Ayako, which leads to dangerous consequences and threatens to tear through the barriers he has partitioned around his existence for so long.

At once quietly reflective and bitterly gritty, The Paradise Bird Tattoo (or, Attempted Double-Suicide) explores a new generation of worker bees who possess a candid fear of living with an inexplicable sense that they must go on for the sake of going on. Choukitsu Kurumatani artfully illustrates a world where not even love can provide salvation for those who are weary of life.

Choukitsu Kurumatani graduated from the German Literature Department of Keio University. He began writing fiction on the side while working at an advertising agency.