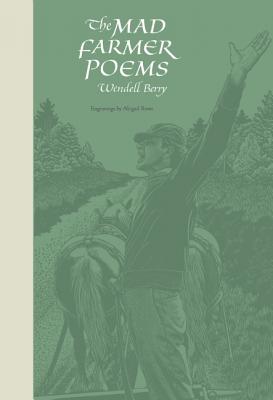 During the otherwise quiet course of his life as a poet, Wendell Berry has become “mad” at what contemporary society has made of its land, its communities, and its past. This anger reaches its peak in the poems of the Mad Farmer, an open–ended sequence he’s found himself impelled to continue against his better instincts. These poems can take the shape of manifestos, meditations, insults, Whitmanic fits and ravings—these are often funny in spite of themselves. The Mad Farmer is a character as necessary, perhaps, as he is regrettable.

Here are gathered the individual poems from Berry’s various collections to offer the teachings of this amazing American voice. After the great success of the lovely Window Poems, Bob Baris of the Press on Scroll Road returns to design and produce an edition illustrated with etchings by Abigail Rover. James Baker Hall and William Kloefkorn offer poems here that also show how the Mad Farmer has escaped into the work of others. The whole is a wonderful testimony to the power of anger and humor to bring even the most terrible consequences into a focus otherwise impossible to obtain.

"Berry enjoins us to look at common parts of creation––trees, rivers, and birds––but meditates upon them with such grace and insight as to ensure that we will never see them as commonplace again."—Splendid Magazine

"Berry continues to offer a compelling vision of the good and the true life."—Boston Globe

"Berry is the prophetic American voice of our day."—Christian Science Monitor